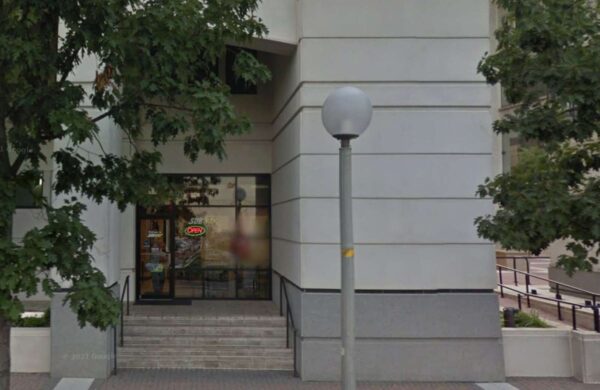 A Subway location on the ground floor of Arlington County’s jail could be getting a rent lifeline this weekend.

The sandwich shop renting space at the base of the Arlington County Detention Center (1435 N. Courthouse Road) has struggled to stay afloat since the pandemic slashed its sales. Although it still operates in the space, it has not paid rent to the county since March 2020, according to a report.

“Subway’s business has declined precipitously during the COVID-19 pandemic,” the report to the County Board says. “It was closed for business altogether in April 2020. Its sales in May 2020 were less than 15% of normal. Although Subway’s sales have recovered to a degree, they are still, as of the date of this report, around one-third below normal.”

On Saturday, the Board is set to review a proposal to lower Subway’s rent during the remainder of the pandemic to a level it can afford. County staff settled on a base rent equal to 9.5% of its gross sales, retroactive to April 2020, according to the report.

“Staff worked with Subway to determine what Subway could afford to pay in rent based on its reduced sales,” the report said. “As a rule of thumb, restaurants can afford to devote roughly 10% of sales to the payment of rent. When sales decline substantially below normal, inflexible overhead like employee salaries and utility charges does not decline to the same degree, and accordingly absorbs a greater percentage of sales. This leaves a smaller percentage of sales that can be applied to rent.”

If approved, the reduction would last until Subway has two months in a row of sales in which 9.5% of their sales is greater than the base rent it is paying, or until one year after the amendment is signed — whichever occurs first. Then, Subway would have 18 months to pay back the rent it owes from before the agreement went into effect.