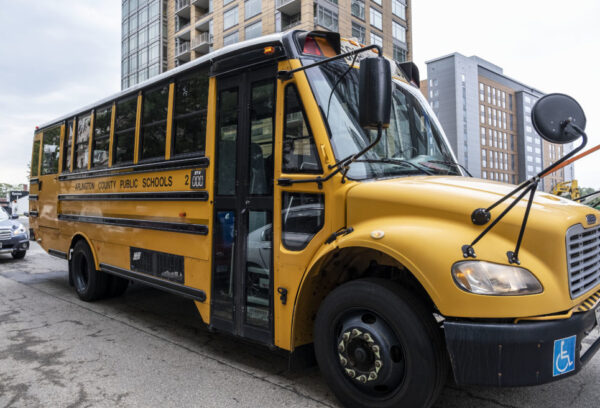 A teen is facing charges after he allegedly threatened and then scratched a fellow student with a knife on a school bus earlier this week.

The incident happened aboard an Arlington Public Schools bus Tuesday afternoon, along Clarendon Blvd in the Courthouse and Clarendon areas. The teen also allegedly ran after the victim and a witness while armed with the knife, after they all got off the bus, police said.

MALICIOUS WOUNDING (late), 2021-11300165, 2100 block of Clarendon Boulevard. At approximately 4:45 p.m. on November 30, police were dispatched to the late report of an assault. Upon arrival, it was determined that at approximately 3:30 p.m., the juvenile victim was riding a school bus when he became involved in a verbal altercation with the suspect. The suspect allegedly brandished a knife and held it to the victim, causing a scratch. A witness pushed the suspect away and he exited the bus. A short time later, the victim and witness were walking in the area of Clarendon Boulevard and N. Barton Street when the suspect began to run towards them with the knife. They were able to run to safety. The investigation is ongoing.

APS spokesman Frank Bellavia told ARLnow that it was a Yorktown High School bus, but was unable to provide more information.

“I don’t have any additional than what is in the crime report,” Bellavia said.

ACPD spokeswoman Ashley Savage said today that the suspect has been identified and is now facing charges.

“The involved juvenile has been identified and charges are pending,” Savage told us. “This remains an active criminal investigation. Anyone with information that may assist with the investigation is asked to contact the Police Department’s tip line at 703-228-4180 or [email protected]”

Police have responded at least two other notable incidents associated with Yorktown over the past few months.

In early August, a brawl broke out outside of the school amid summer classes. Police said at the time that they were investigating the fight, which was caught on video.

In October, a girl walking near the school during the homecoming football game was touched inappropriately, prompting a police investigation and, later, walkouts and a petition against sexual misconduct at Yorktown. The petition has garnered tens of thousands of signatures to date.

Over the summer the Arlington School Board voted to remove School Resource Officers from schools. The Board is set to consider the draft of a new, scaled-down agreement with ACPD at its Dec. 16 meeting. The Board chair recently said that she believes Arlington schools remain safe even without the SROs as a regular presence in the buildings.

Meet Savage, a 4-year-old classy Chihuahua with a lot of personality who will be the ultimate lap dog and looking for his forever home.

Seventy-eight local individuals, businesses and organizations were recognized as “Covid Heroes” at yesterday’s County Board meeting. More than six dozen locals were honored for having “demonstrated exceptional service throughout the…

The Arlington County Board says it’s on the side of Arlington Public Schools in the battle with the state over mask mandates. Arlington and six other Northern Virginia school systems…

An ongoing redevelopment project on the “Landmark Block” in Courthouse is poised to realize a significant portion of a 2015 vision to transform the neighborhood. But beyond the “Landmark” project…