The 168 cases reported on Thursday was the county’s second-highest daily case total for 24 hours, before being supplanted by the 185 cases reported today. The local single-day record remains the 193 cases recorded on Jan. 9, 2021, according to Virginia Dept. of Health data.

Arlington’s seven-day moving average of new coronavirus cases spiked this week after a brief plateau, reaching an average of 98.4 cases per day today.

Hospitalizations — which typically lag reports of new cases by a week or more — are also on the rise, with six new hospitalizations between Monday and Thursday. Prior to this week, Arlington had not seen a day with a reported hospitalization since Nov. 29. 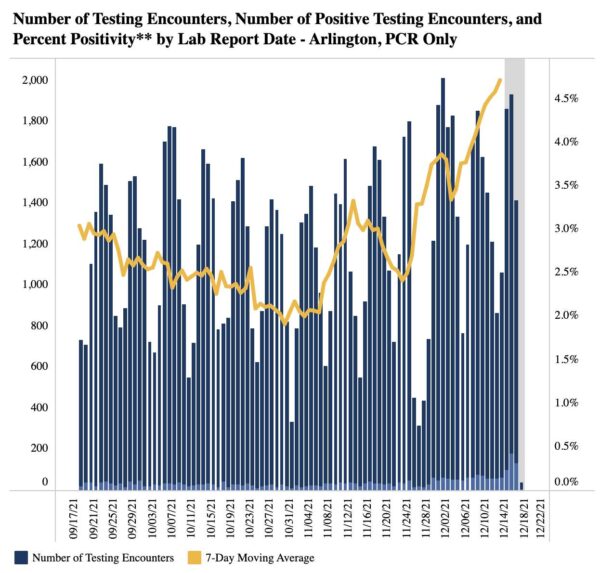 The county’s test positivity rate continues to increase as well, and currently stands at 4.7%. That doesn’t incorporate data from the past couple of days, however — preliminary numbers from VDH suggest a 9.3% positivity rate for lab reports on Wednesday, when 1,931 PCR tests were performed in Arlington.

This morning, a long line could be seen outside the county’s Covid testing booth in Courthouse.

The rise in cases in Arlington comes as the nation appears to be on the verge of a significant wave of cases fueled by the new, more infectious Omicron variant of COVID-19.

“It’s here now and it’s spreading and it’s gonna increase,” President Biden said today of Omicron case, as quoted by Axios. “We are looking at a winter of severe illness and death for the unvaccinated — for themselves, their families and the hospitals they’ll soon overwhelm.”

On CNN, one infectious disease expert described what’s coming as a “viral blizzard.”

In the New York City area, which is seeing a big increase in cases, the test positivity rate doubled over the course of three days last week. Closer to home, D.C. yesterday reported just over 500 cases, its highest single-day case total of the pandemic. Today’s D.C. case count was even higher.

Today's D.C. COVID data: a record-breaking 844 new positive cases — an increase over yesterday's 508, which was, til today, the most ever reported in a single day

While Arlington’s vaccination rate — more than 90% of the adult population has received at least one jab — makes the county less susceptible to the worst health outcomes from a large Covid wave, there could still be a sizable influx to local hospitals.

Even if Arlington is fortunate enough to avoid a significant increase in serious illness from Covid this winter, a large wave would have other deleterious effects. Masking requirements may become stricter in some places and temporary closures of certain venues are possible. Daycare centers, pre-schools and K-12 schools could have outbreaks that send many students home to quarantine.

Arlington Public Schools has seen a more than 60% rise in cases over the past week, compared to the prior seven day period — 103 cases this past week compared to 64 cases the previous week.

The Biden administration today announced a new “test to stay” strategy that could keep students who were in close contact with those who test positive in schools, rather than quarantining at home for 1-2 weeks.

CNBC, meanwhile, reported today that Omicron is likely to further delay plans to return to bring workers back to office buildings. Others that have brought workers back may temporarily go back to remote-only, as the company behind ARLnow announced today for its in-person employees.

Expect more closure announcements and testing shortages in the coming weeks, experts caution. Just this afternoon, Arlington County said it was having issues with limited supplies of testing kits.

UPDATE: Due to limited test kits received, only the @Curative kiosks at Courthouse and Virginia Square will open today (Dec. 17, at 1 p.m.); Arlington Mill will remain closed today. Appointments are being notified.

On the bright side, if Omicron infection patterns from South Africa hold, it’s possible that the current wave may be relatively short-lived and result in milder cases than the waning (but still present) wave of Delta variant cases.

"You're going to start to see things close down over the next 5 days. I think people are going to make decisions to close things early heading into the holidays," says @ScottGottliebMD. "Right now I'd be taking extra steps to be cautious." pic.twitter.com/RP8gcNd0VL

In case it’s not obvious, many places in the U.S. may run out of PCR testing capacity soon. I don’t think the fact that many vaccinated will test positive has sunk in. Current quarantine/isolation guidelines don’t fit an Omicron wave. I think we have a communication emergency.

"The cases are really collapsing in the Gauteng province–the most densely populated part of South Africa where this epidemic got in first," says @ScottGottliebMD. "It went up very fast. It went down very fast so we are missing something about the epidemiology of this disease." pic.twitter.com/8Y0s3ATtZk