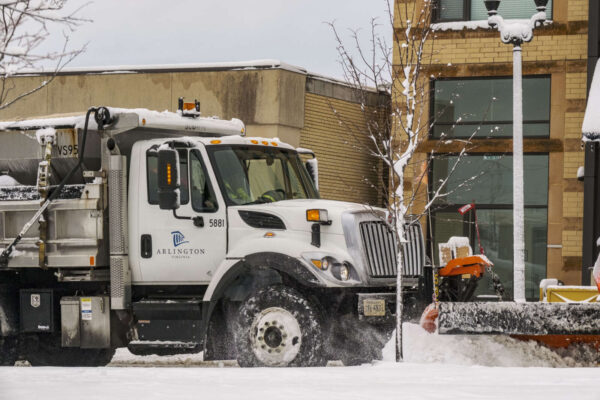 If you didn’t already know, the brine lines on the roadways have told you by now: Arlington will likely see snow this weekend.

Residents have been regularly checking the forecast for days in anticipation of what is likely to be more winter weather. At this point, the forecast suggests we’ll see a few inches of snow starting Sunday afternoon, before a changeover to sleet, freezing rain and then plain rain.

“This will create very hazardous driving conditions for a time Sunday as roads will be frozen from cold air ahead of the storm,” according to the Washington Post’s Capital Weather Gang.

Arlington started putting down brine yesterday (Thursday) afternoon and the county’s Department of Environmental Services recommends residents continue to check forecasts, look for updates on its social media and avoid travel during and in the hours after a storm. Residents can check in on road conditions through the county’s traffic cams and snow plow map.

Telltale lines: Arlington crews are brining roadways ahead of the winter weather event expected Sunday night into Monday. Know when pretreatment is an option and why it's best to stay off the roads during, and in the hours after, a storm: https://t.co/DuInmBchJW. #ArlWX pic.twitter.com/xzqmDb3qpJ

The county will treat roadways and trails as snow begins to fall but won’t start to plow until there are at least 2 inches of snow. Crews will clear snow from all streets and county trails, with primary and secondary routes tackled first and neighborhood streets last.

“We should know more Friday in terms of whether the precipitation turns to rain with above-freezing temperatures into Monday,” DES spokesman Peter Golkin said. “The fact that Monday is a holiday will help with any large storm response because of less traffic. Crews need space and time clearing snow and ice.”

The Virginia Department of Transportation started putting brine down on state roadways after this morning’s commute.