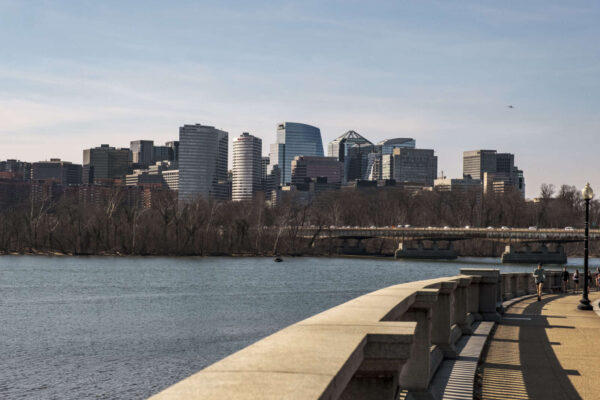 Zoomers — the generation born after 1997 — make up the “only active generation of apartment seekers nationwide,” and they are disproportionately choosing Arlington County, according to a new study from RentCafe.

Between 2020 and 2021, Arlington saw a 55% increase in apartment applications submitted by this age group, according to the website, which follows trends in the apartment market. It analyzed 3.2 million applications for the study.

“Once known as a verified Millennial hub, Arlington is getting a much-needed glow-up from this up-and-coming generation of young renters, ranking as the country’s sixth trendiest Gen Z hub,” RentCafe said.

That ranks Arlington behind the cities of San Francisco, Jersey City, New York City, Philadelphia and Boston and ahead of San Jose (California) and Seattle. 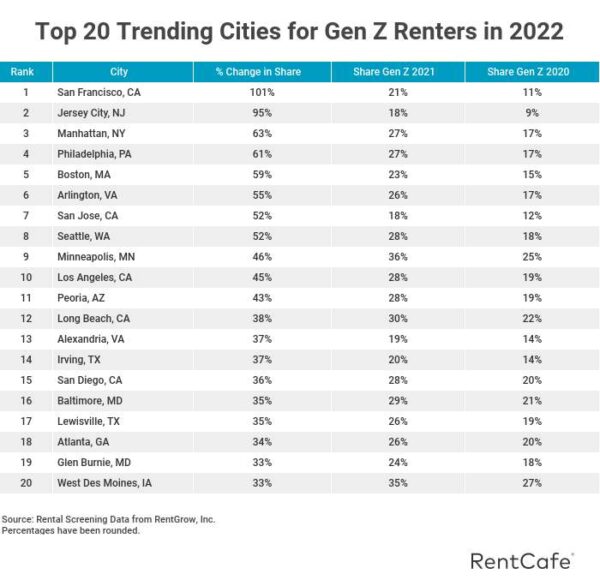 Zoomers are gravitating here after spending a one-year hiatus back home or in their college towns, RentCafe says.

“Young adults returned to their families’ homes in larger numbers in 2020, and with Gen Z being particularly affected by the pandemic, it’s safe to say it played an important role in their migration pattern,” RentCafe spokeswoman Michelle Cretu tells ARLnow.

But now, as society emerges from the pandemic, Zoomers are “following in the footsteps of their Millennial counterparts when it comes to independent living,” she said.

Millennials came to Arlington in droves during the Obama years, according to a previous RentCafe study, which found 52% of Crystal City’s population was made up of the generation also known as Gen Y. For them, Arlington offered employment opportunities plus plenty of nightlife and housing options, Cretu said.

Now, Gen Yers are in their home-buying years, and many are ditching their renter status to buy homes in Alexandria, Reston and Frederick, Maryland, according to RentCafe. 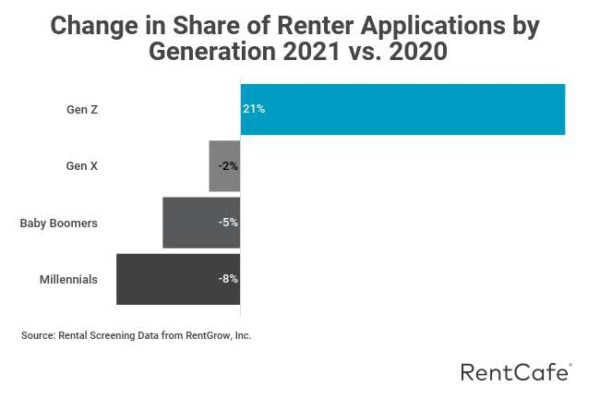 Younger Millennials, however, are still renting because they’ve been “outpriced by an overly competitive housing market,” she said.

Data show the new generation is, on a relative basis, choosing Arlington over D.C., which recorded a smaller increase — 31% — in the share of Gen Z renters. The City of Alexandria, the 13th trendiest Zoomer hub, also ranks higher than the District.

“So, it’s not a matter of Gen Z not choosing D.C., but one of Zoomers choosing Arlington in higher numbers,” Cretu said.

One reason is Arlington’s growing concentration of tech jobs, fueled in part by the construction of Amazon’s second headquarters.

“While both cities score in diversity and vibrant social scenes, Arlington is a developing city where new career opportunities are just emerging,” she said.

Zoomers are showing a keen interest in tech jobs, with three in 10 ranking software development as their top career choice, according to a study by the software company CloudBees. So it comes as no surprise that they are choosing Arlington alongside the well-known tech sectors of San Francisco and Seattle and the new tech hubs of Atlanta, San Diego and Baltimore.

Another factor behind the trends Cretu cited is that Arlington has bigger apartments.

Developers are building larger units here than they were five years ago, while in D.C., the average square footage of a new apartment is shrinking. The prospect of more spacious new construction could also be why the RentCafe list features suburbs of New York City and Dallas.