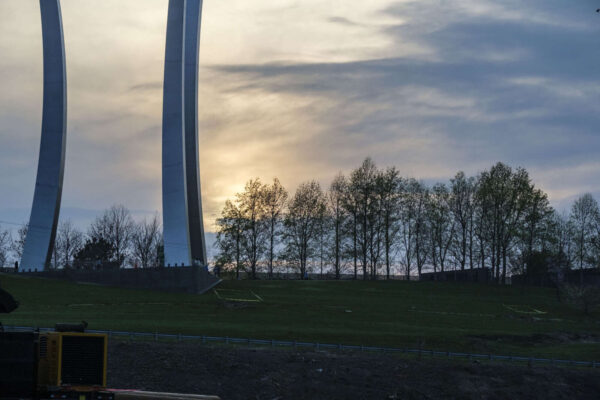 Man Convicted of Crystal City Shooting — “A convicted murderer has been found guilty on four charges for shooting and wounding his ex-girlfriend in her Arlington, Virginia, office in 2019. Mumeet Muhammad forced his way into the woman’s office, in the 1500 block of Crystal Drive in Crystal City, and shot the woman on Aug. 28, 2019. Muhammad also was shot by police.” [WTOP]

Body Found Near Roosevelt Island — “A death investigation was underway Wednesday after a body was found in the Potomac River, D.C. police said.  Authorities said the body was found in the water between Teddy Roosevelt Island and the Virginia shoreline under the footbridge pedestrians use to access the island… Officials with knowledge of the investigation said the body was heavily decomposed.” [NBC 4, Twitter]

GW Parkway Chase Leads to Lawsuit — “A D.C. police captain sued the District on Tuesday, alleging he was retaliated against after trying to stop a high-speed pursuit last month that ended with a car overturning on the George Washington Memorial Parkway, causing injuries and bringing rush-hour traffic to a halt.” [Washington Post]

Task Force: Expand County, School Boards — “Increasing the size of the Arlington County Board and School Board by at least two members is among the recommendations of the Arlington County Civic Federation’s task force on local governance, which on April 12 delivered the first of what are expected to be two sets of proposals to be voted on by the organization in June.” [Sun Gazette]

PSA: Steer Clear of River Near Chain Bridge — From D.C. Fire and EMS: “The river knows no boundaries. All this holds true for the District. One slip off the rocks can lead to a fall into a deceptively calm looking river actually laden with treacherous currents and hidden rocks that quickly pull you under. Especially the case around Chain Bridge.” [Twitter]

Lease Change Scores Big Bucks for County — “Arlington County Board members on that date voted 5-0 to support a change in technical aspects of the lease that guides the relationship between the county government, which owns substantial parcels in the Courthouse area, and the developer JBG Smith, which holds ground leases and owns the buildings on some of those very same parcels… By making the changes, which staff say carry little risk to the county government or taxpayers, the Arlington government coffers would receive somewhere in the area of $10 million to $12 million in a one-time payment from JBG Smith.” [Sun Gazette]