One of the chief complaints we hear as immigration lawyers is that immigration processes take forever.

U.S. citizens who file a petition on behalf of their spouses are taking at least a year in most places. Many employment-based green card applicants are waiting at least two years to receive their green cards. And asylum? The average wait time for an interview in the D.C. area is about five years. Trust us; we hate it, too.

However, if you’re tired of waiting for a decision, there is a solution. Sue the government in federal court! Here’s the deal:

In many types of immigration cases, a statute or regulation dictates that the immigration authorities must make a decision on application within a certain period of time.  For example, Congress specifically stated in the William Wilberforce Trafficking Victims Protection Reauthorization Act of 2008 that petitions for juveniles that have been abused, abandoned, or neglected by one or both parents, must be adjudicated within 180 days.

Under the Administrative Procedure Act, or APA, Congress created the ability to sue an agency for failing to act when the agency is required to act, or when the action is unreasonably delayed or unlawfully withheld. A good example of a decision unlawfully withheld is a special immigrant juvenile petition that must be adjudicated in 180 days. However, you can also file an APA lawsuit regarding discretionary applications, like green card applications. Just because the immigration authorities have the discretion to approve or deny an application, it does not mean that the authorities can sit on the case forever.

Additionally, under the Mandamus Act, a lawsuit can be filed to compel an agency to act. In these cases, the plaintiff, or the person suing the agency, must show that (1) she has a clear right to the relief requested; (2) the agency has a clear duty to perform; and (3) there is no other adequate remedy available.

An important note: The goal of the lawsuit is to receive a decision, whether negative or positive. It is not to compel an approval. The only thing the judge can do is order the agency to take action in the pending immigration matter. 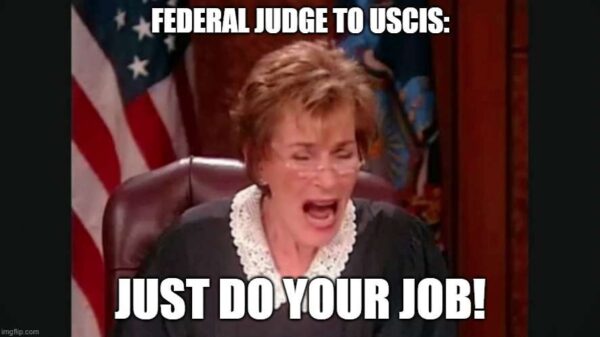 In the majority of cases, these lawsuits do not go all the way to a full trial. Usually, the government does not want to deal with the lawsuit, and instead will make a decision on the application or petition so that the case can be dismissed.

If you are tired of waiting around for USCIS, the Department of Labor, or the Department of State to make a decision in your case, we recommend that you speak with an experienced immigration attorney that handles these types of cases in federal court. Picking the right federal court in which to sue can be very tricky, and each court (and sometimes each judge) has their own specific rules that you must follow or else you risk having your case rejected. You also have to provide a copy of your complaint to many different offices, and failure to do so can also result in the case being dismissed.

As always, we welcome questions and comments. We’ll answer all we can!