Though the blizzard is long gone, some area grocery stores are still awaiting fresh shipments of milk, eggs, bread and meat to restock shelves stripped bare before and during the storm.

Shelves normally stocked with milk, eggs and bread were empty earlier this afternoon at the Safeway and Target stores on Wilson Boulevard in Rosslyn. Though employees at both stores declined to say much, they did say it may take another day before they can restock.

An employee at the Whole Foods at 2700 Wilson Boulevard said the store had just four cartons of eggs left, and a worker at Mom’s Organic Market (1901 N Veitch Street) said milk supplies were running low.

Some residents also have reported shortages of certain items at the Clarendon Trader Joe’s (1109 N Highland Street). Joe Flinchum, a supervisor at that location, said his store hasn’t received a delivery since last week.

“Our warehouse is really far away,” Flinchum said. “They’ve obviously been impacted by the weather just as we have. We may get a perishable food delivery tentatively tomorrow morning.”

But not every store in the area is out of fresh food.  An employee at the customer service desk of the Harris Teeter at 600 N Glebe Road said the store has everything except snow shovels and salt.

That’s the message from Virginia’s Department of Transportation (VDOT) as a possibly record-breaking blizzard looms over the area. Most roads in Arlington were at least partially snow-covered as of 4:50 p.m. this afternoon, and conditions are only getting worse as the snow piles up.

So far, locals seem to be heeding VDOT’s advice. As of 4:30 p.m. today, there were 19 crashes and 60 disabled vehicles reported by the department among Prince William, Loudoun, Arlington, Alexandria and Fairfax counties since midnight last night.

It's been relatively quiet but we are seeing vehicle accidents. Non-emergency travel is discouraged. pic.twitter.com/hWA4WXPML5

But the full brunt of the storm has not arrived yet, according to the Capital Weather Gang. Conditions are expected to worsen overnight and into tomorrow morning as snowfall becomes heavier and winds pick up. 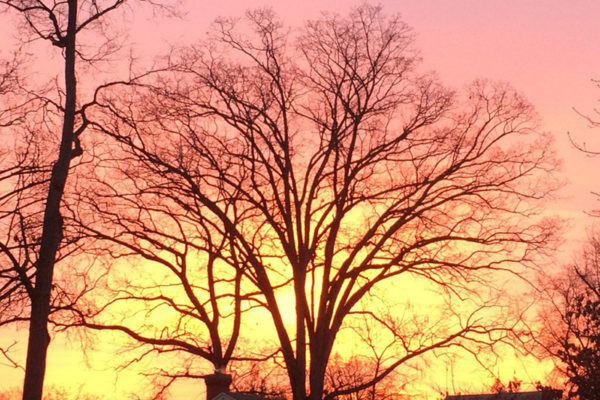 Brace Yourselves — Latest predictions say the snow is set to start as early as noon today, which happens to be the same time federal offices in D.C. and the surrounding area are expected to close. [Capital Weather Gang]

Snow Tips — The area is bracing for a potentially historic blizzard. Here’s what you need to know to ride out the storm. [ARLNow]

Community Radio Station ‘Off and Running’ — Arlington’s community-run radio station, WERA, is off to a good start, says its director of community programs. The station, which is at 96.7 FM, is adding new programs weekly. [InsideNova] 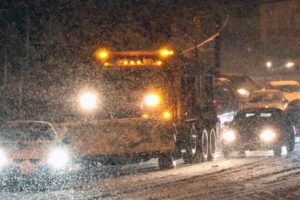 (Updated at 2:05 p.m.) Here we go again. Right in the midst of a stretch of mild weather, we’re bracing for the possibility of snow this weekend.

Forecasters have been predicting some sort of precipitation on Sunday, but it’s unclear whether it will be mainly snow or rain. As is often the case in our area, weather models are changing by the hour. Don’t get your hopes up for a repeat of the Presidents Day Blizzard of 2003 — but do plan on the chance of the season’s most significant snowfall.

In advance of the possible storm, the Arlington County Department of Environmental Services has issued a Phase 1 Alert, meaning crews will pre-treat roads with salt or brine as necessary. They’re also preparing snow removal equipment and personnel for the weekend.

Dominion Virginia Power also reports making preparations. Trucks are being stocked and fueled, and crews are ready to respond to outages. Customers can call 1-866-DOM-HELP to report outages and downed lines.

A group of people were sledding down 14th St. N. in Courthouse tonight, just like they were doing over the weekend.

In Pentagon City, however, most of the people out and about were there strictly out of necessity.

There were a few people walking their dogs. Police and fire department SUV’s passed by. But by and large, most of the people braving the 40 mile per hour wind gusts were plowing, shoveling or hauling snow.

Here are some photos and a video taken tonight. 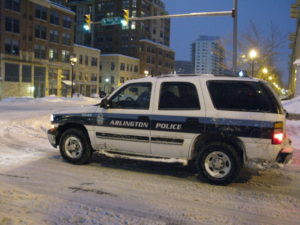 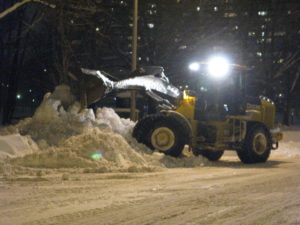 END_OF_DOCUMENT_TOKEN_TO_BE_REPLACED

Here’s an update on the blizzard statistics we’ve compiled today.

Here’s a summary of some of today’s closures:

“Attempt” is a good way to put it. Here’s the Special Weather Statement…

DO NOT ATTEMPT TO DRIVE THIS MORNING AND EARLY AFTERNOON. LIFE THREATENING BLIZZARD CONDITIONS HAVE DEVELOPED RAPIDLY ACROSS THE BALTIMORE-WASHINGTON REGION THIS MORNING.

AT 7:27 AM THIS MORNING… A WIND GUST WAS RECORDED TO 60 MPH AT MANASSAS VIRGINIA. NUMEROUS WIND GUSTS OVER 40 MPH HAVE OBSERVED AROUND THE REGION ALONG WITH WHITE-OUT CONDITIONS.

IF YOU GET STRANDED IN YOUR VEHICLE… DO NOT LEAVE YOUR CAR TO TRY TO WALK FOR ASSISTANCE… YOU CAN QUICKLY BECOME DISORIENTED IN WIND DRIVEN SNOW AND COLD. THIS STORM WILL SUBSIDE EARLY THIS EVENING… SO WAIT IN YOUR CAR FOR EMERGENCY HELP TO ARRIVE. PERIODICALLY RUN YOUR ENGINE FOR ABOUT 10 MINUTES EACH HOUR FOR HEAT. ENSURE YOUR EXHAUST PIPE IS CLEARED OF SNOW AND ICE. CRACK YOUR WINDOWS TO AVOID CARBON MONOXIDE POISONING. TIE A COLORED CLOTH TO YOUR CARS ANTENNA TO BE VISIBLE TO RESCUERS. FROM TIME- TO-TIME… MOVE YOUR ARMS… LEGS… FINGERS… AND TOES TO KEEP BLOOD CIRCULATING.

A police officer is responding to someone complaining of “loud noise and furniture movement” in an Arlington apartment building. 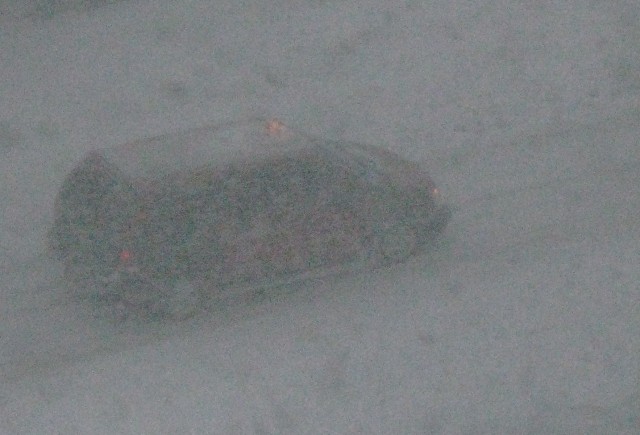