Audrey Clement is reportedly thinking about running for office again, this time for Arlington School Board.

That’s according to a post on Arlington Yupette, an anonymous, sometimes conspiracy-laden blog often associated with Jim Hurysz, a top donor and advisor to Clement.

It would be — by our count — either the eighth or ninth run for local office for the repeat candidate, who most recently ran for County Board. The Yupette blog suggests Clement would focus on fiscal restraint as a School Board candidate.

“The School Board will be increasingly focused on giving APS parents more Taj Mahal schools with every conceivable amenity that they’ve historically demanded,” it says. “So A.Y. is happy that a candidate with fiscal sanity who’s not addicted to Smart Growth is considering running for School Board.”

But not everyone thinks another campaign is a good idea for Clement. Sun Gazette editor Scott McCaffrey opined this morning on his blog that it is “time for a perennial candidate to call it a day.”

It’d be her second bid for that post, and she’s run either six or seven times for County Board, as well. Just about every time, she’s either garnered (if she was the lone non-Democrat on the ball) or shared (if there were more than one) the roughly 30 percent of votes cast against the dominant political party in A-town.

I say this as one who likes Clement and thinks she brings valuable points of view to the community conversation: It’s time for her to stop running for office.

If past track record is any indication, the odds will be overwhelmingly against Clement, who would be running to unseat incumbent Barbara Kanninen. On the other hand, uncontested elections are rarely a good thing in a democracy, and Clement has added to the civic conversation whenever she has run.

In your opinion, should Clement run again, or is time to hang it up, at least for now?

From politicians to fashion bloggers, Arlington is home to a variety of social media influencers. One common thread among them? Many run their social media feeds like a business.

Angelica Talan, a resident of the Courthouse-Clarendon area, created the blog Clarendon Moms in 2011. Talan often frequented restaurant launches or book signings in the area but noticed she was the only mother present. She created Clarendon Moms as a resource for other Arlington-based mothers to learn about these free events.

The blog eventually expanded to include travel, fitness and fashion advice, and two years later, she began to profit from sponsored posts.

“It was never my intention,” Talan said. “I really just wanted to connect people with what was going on. Never in a million years would I have guessed that you could combine your passion for writing, photography, mingling with people and connecting people, create a blog and make money.”

In 2016, Talan’s friends helped her realize she needed to create a second blog, Angelica in the City, which is geared towards single women instead of mothers. Both of Talan’s blogs strive to promote positivity and an educational purpose.

“On Instagram if you don’t have a good picture people are going to go right past it,” Daveport said.

They launched a website last September, which has the best places to eat, explore and buy a home. The couple started hosting events with local businesses in January.

Sarah Phillips of Arlington’s Penrose neighborhood and Michelle Martin, who lives in Los Angeles, began their fashion blog 52 Thursdays as a hobby.

Both women studied fashion in college, where they were sorority sisters. In 2013, they decided to create a business revolving around that shared passion.

“We came up with 52 Thursdays because our wine nights were on Thursdays,” Phillips said.

At first they did not share the website with anybody. Months went by and the women decided to give their web page a makeover: they organized a photo shoot at a studio and hired a professional photographer.

Now, the women partner with various brands to make a profit. They enjoy working with small businesses in Arlington such as South Block and LavaBarre. The women also offer fashion, blogging, branding and social media consultations as well.

END_OF_DOCUMENT_TOKEN_TO_BE_REPLACED 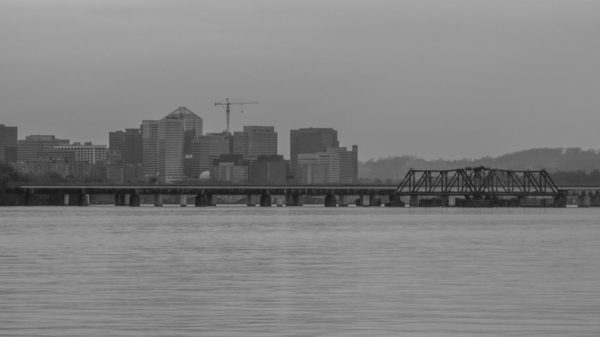 Major Rosslyn Development Approved — A sweeping five-phase redevelopment of 7.65 acres of prime Rosslyn real estate was approved unanimously by the Arlington County Board on Saturday. The Board approved the framework for the development, though final approval will be necessary for each phase. Developers Vornado and Gould Property Company expect to complete the project over the course of 25 years. [Arlington County]

Gun Store Saga Continues — Who owns NOVA Armory, the gun store that’s planning to open in Lyon Park despite community opposition? The man who speaks on behalf of the business and holds its federal firearms sales license isn’t saying, exactly. Dennis Pratte declined further questions after describing it as “a female, minority-owned business” and stating “I may or may not be the owner.” Meanwhile, county leaders say there’s nothing they can legally do to prevent the store from opening. NOVA Armory is planning to a grand opening on March 26. [Washington Post, InsideNova]

Teen Tourist Scammed at Pentagon City Mall — A California teenager on a school trip to Washington was reportedly scammed out of $97 by an armed man at the Pentagon City mall. The man compelled the teen to give him $97 in exchange for what turned out to be a counterfeit $100 bill. [NBC Washington]

Arlington Natives Live Blog Day at Ballston Common Mall — Two friends who grew up in Arlington’s Bluemont neighborhood decided to spend all of Saturday at Ballston Common Mall, ahead of its imminent demise, and live-blog their experience. The blog mixes nostalgia for time spent shopping and working at the mall with observations about the current mix of largely chain restaurants and small, quirky stores. [Things Remembered: A Day at Ballston] 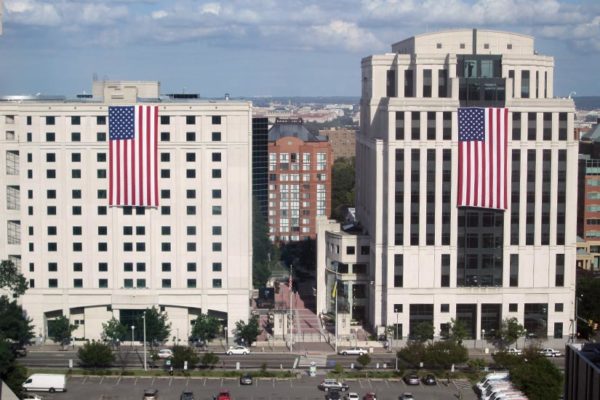 APS To Use ‘Big Data’ to Prevent Dropouts — Arlington Public Schools held a contest this summer for “big data” companies to analyze its student performance data, and plans to use the newly-released results to predict which students are at risk of dropping out of school. The winning company, Deep Learning Analytics, found that APS should refine its data collecting techniques. In addition, it found that, along with attendance, behavior and coursework, socioeconomic standing is a predictive indicator for school dropouts. [Arlington Public Schools]

Military Jet to Land at DCA — The Scorpion, a new military fighter jet, will land at Reagan National Airport on Saturday. The jet — manufactured by Textron AirLand LLC — will stay in a DCA hangar for a week, for marketing purposes. [InsideNova] 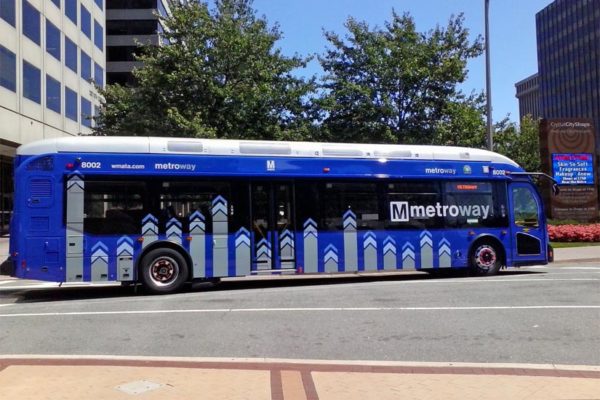 Blog Points Out Bike Lane Blockers — Frustrated with supposed inaction by Arlington County Police, a local resident has created a Tumblr site to publicly “shame” the owners of vehicles that illegally park or idle in bike lanes in Arlington. [Arlington Bike Lane Blockers]

Clarendon Farmers Market Starts Tonight — The Clarendon Farmers Market is back for the season, starting tonight. The market will run from 3:00 to 7:00 p.m., in the newly renovated Clarendon Central Park, next to the Metro entrance. The market will run every Wednesday through Dec. 18 before taking a break for the winter. Another seasonal farmers market, the Crystal City Freshfarm Market, is set to start the season on Tuesday, April 30. [Clarendon Alliance, Freshfarm Markets]

District Taco to Open Third Location — District Taco, which opened its first location on Lee Highway, is getting ready to open its third location. The new District Taco restaurant, like the second location, will be located in D.C. [Prince of Petworth]

Tejada Talks Immigration Reform — County Board Chair Walter Tejada spoke to a group of pro-immigration supporters at St. Charles Borromeo Catholic Church in Clarendon Tuesday morning. Tejada told the crowth that “it is our duty” to “work and fight together for comprehensive immigration reform.” The group is planning a rally at the Capitol next week. [WJLA]

Amy Moore, the writer behind Clarendon Culture, is retiring the blog after deciding to move to Bethesda.

In her last blog post, Amy says she would have liked to buy a home in Lyon Village, but it turned out to be beyond her and her husband’s price range. Instead, the couple and their baby girl moved to Bethesda, where they bought a house about six miles away from D.C. proper.

Amy is now launching a new Bethesda blog at www.Bethesdan.com. 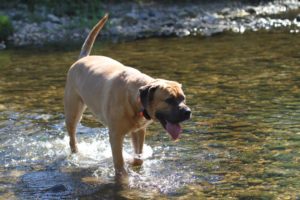 Arlington, the home of seven individual dog parks, is quickly becoming a haven for locally-focused blogs about dogs.

There are at least four dog-related blogs with an Arlington connection at the moment, including two that have sprung up in the past couple of months. They include the NOVADog Magazine blog, Two Dog Tales, Animal Eyes Arlington and the new A-Town Dog Blog.

“Arlington has lots of dog owners, and lots of great dog parks, and I enjoy taking photographs of the dogs,” the anonymous dog blogger writes, on the blog’s About page. “I’ve had owners ask me for copies of the pictures I’ve taken before, so I decided that I’d just start sharing them publicly.”

Animal Eyes Arlington, which also launched earlier this summer, focuses on “making a positive impact on the lives of companion animals and their families.” Recent posts have including a missive about the rehabilitation of abused pit bulls, a profile of a therapy dog that participates in the Paws to Read program at Arlington libraries, and an article about dog trainers who help train rescue dogs.

In the latest installment of the county-run Arlington Virginia Network’s “Food for Thought” segment, host Katie Greenan interviewed local resident Lisa Cherkasky, who has made a 25-year career out of preparing food to be photographed.

Cherkasky has an eclectic set of tools for making food look good, from spraying Armor All on bread to prevent it from drying out to using glycerin to make meat look juicy.

She also runs a local food blog, Lunch Encounter, which recently profiled the Waffle Shop on Mt. Vernon Avenue in the Arlandria section of Alexandria. 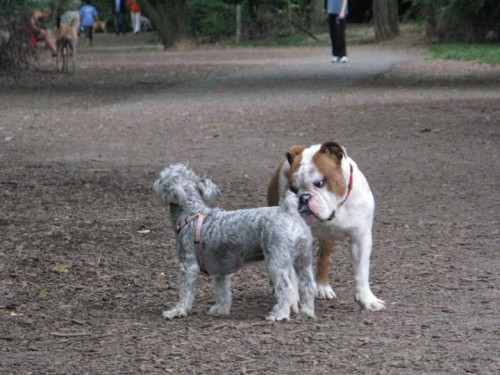 Oil Spill Dogs Need an Adoptive Family — Arlington’s Lost Dog and Cat Rescue Foundation is trying to find a home for the last three of 12 dogs brought up from Louisiana after the Gulf oil spill. The shihtzu family — Gizmo, Trixie and Rocky — were given away by their former owner after he lost his job as a fisherman as a result of the spill. The story and photos from Fox 5.

Check out the dueling mottos for each.