Arlington County has debuted signage for the newly-renamed “Boeing Fields at Long Bridge Park” in recognition of Boeing Company’s donation of $10 million to the county park.

The new sign at the athletic complex was unveiled today (Wednesday) during a ceremony at the park. Boeing CEO Dennis Muilenburg, County Board Chair Christian Dorsey and County Manager Mark Schwartz spoke at the event.

Boeing’s donation will help to cover the maintenance and operation expenses of Long Bridge Park, which is adjacent to the aerospace giant’s D.C. area headquarters in Crystal City.

“Sometimes these corporate partnerships don’t feel like a decent match, but with Boeing Fields, they’re right here, they’re in the community, so it made sense,” said Dorsey.

The funding also provides free access to the forthcoming Long Bridge Aquatics & Fitness Center for active-duty military and their families, according to a county press release. Once completed, the 50-meter pool inside the aquatics center will also be named after Boeing.

“Boeing is committed to making a difference in the community and is proud to support members of the military who give so much to keep us safe,” said Tim Keating, Boeing’s Executive Vice President for Government Operations.

Following the announcement earlier this year, the County Board is set to officially accept the donation at its upcoming meeting on Saturday, Sept. 21. 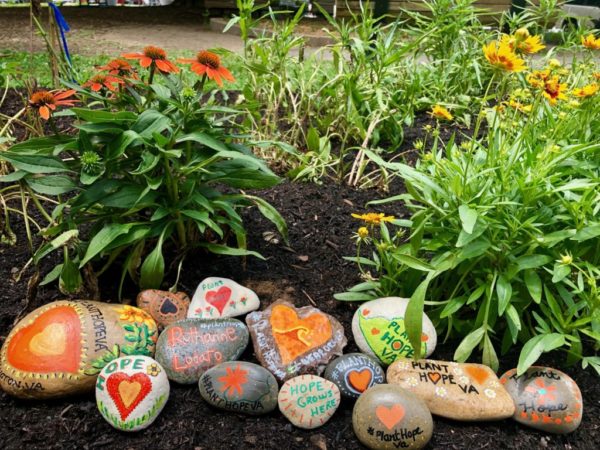 Marymount Prez Wants to Double Enrollment — “Irma Becerra hit the ground running the moment she took over the Marymount University presidency… her chief goal is as straightforward as it is ambitious: Double the school’s size in the next five years.” [Washington Business Journal]

18th Street Headache — “As they wrap up the demolition of the Clark St. bridge over 18th [Street S. in Crystal City], the eastbound side of 18th will be closed Thursday and Friday this week.” [Twitter]

Howell Gets Fall Challenger — “It’s an uphill battle, to be certain, but Fairfax County Taxpayers Alliance president Arthur Purves will take on, as a Republican, seven-term incumbent state Sen. Janet Howell (D-32nd) in the Nov. 5 election. The district snakes from Howell’s home turf of Reston eastward into portions of Arlington.” [InsideNova]

Boeing’s Space HQ Moving Out of Arlington — “Boeing will move its space headquarters from Arlington, Va., to the Florida Space Coast as it pursues a number of rocket and spacecraft programs, including one that would launch astronauts from U.S. soil for the first time since the space shuttle retired in 2011.” [Washington Post]

Townhomes Proposed for Crystal House Property — “The proposed expansion of the Crystal House apartment complex is getting a little larger, with 21 townhomes now part of plans at the Crystal City property… The company has already filed for permission to add 798 units across four new buildings on the 29.8-acre site.” [Washington Business Journal]

Nearby: Design of Potomac Yard Metro Revealed — “The city of Alexandria, Washington Metropolitan Area Transit Authority and Potomac Yard Constructors, the private joint venture picked to build the station, have submitted a design for an upcoming evaluation by the city’s Board of Architectural Review. The station design calls for a stone base, a metal canopy and metal louvers, a glass curtain wall and exo-skeleton system, a standing seam metal roof and roof skylight panels. There will be bathrooms on the eastern side, between a set of elevators and an electrical room.” [Washington Business Journal] 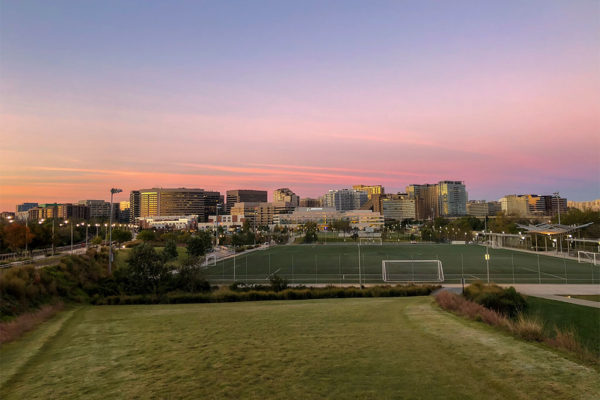 The Boeing Company is donating $10 million to Arlington County for maintenance, operations and programming at Long Bridge Park and the forthcoming Aquatics Center, the county announced Tuesday.

In exchange, the county is renaming the athletic fields at the park — which is adjacent to Boeing’s D.C. area headquarters — “Boeing Fields at Long Bridge Park,” complete with new signage. Also being named: the 50-meter pool inside the aquatics center.

Arlington County is pleased to announce that The Boeing Company has made a $10 million donation in Arlington County for Long Bridge Park (LBP). In recognition of this investment, Arlington will soon name Boeing Fields at Long Bridge Park, as well as name the 50-meter pool inside the future Aquatics & Fitness Center, which is expected to open to the public in winter 2021.

Boeing’s commitment and partnership with Arlington County and the Arlington Community Foundation will support maintenance and operational expenses at both facilities and will provide access and programming for active duty military and their families at the Aquatics Center.

“This creative and generous investment by Boeing offers a real win for our community,” said Arlington County Chair Christian Dorsey. “It not only helps provide financial support for our new facility, but also establishes a special opportunity to give back to an important group — our active-duty military families serving in the region.”

“Boeing is committed to making a difference in the community and is proud to support members of the military who give so much to keep us safe,” said Tim Keating, executive vice president for Government Operations at The Boeing Company. “We are especially excited to announce this innovative partnership with Arlington County, which will allow us to make a substantial impact in our own backyard.” […]

What do you think of the donation and the new name? 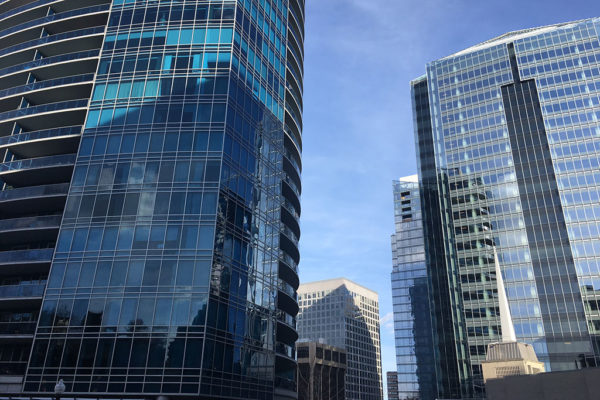 County to Buy Houses for Fire Station — The Arlington County Board last night approved the purchase of two houses on N. Culpeper Street for a total of $1.68 million. The houses are needed for the construction of a new Fire Station No. 8. One house will be torn down to make way for a temporary fire station, while the other will serve as quarters for firefighters at the station. [Arlington County]

Boeing to Move Defense HQ to Arlington — Boeing is moving the headquarters of its Defense, Space and Security unit from St. Louis to its existing regional HQ in Crystal City. The move will bring about a dozen top executives and fifty support staff to Arlington. [Washington Business Journal]

County Buying Bus Maintenance Site in Springfield — County Board members unanimously approved the $4.65 million purchase of 2.15 acre industrial site in Springfield, Va., to be used as a future heavy maintenance facility for Arlington Transit buses. After it is built, the facility will replace the current leased ART maintenance facility, located in the Alexandria section of Fairfax County. [Arlington County, Arlington County]

ACPD Distributing Toys for the Holidays — Arlington County Police Department officers have been delivering toys to Arlington Public Schools families in need, after collecting the toys during the department’s Fill the Cruiser drive. [Twitter]

Recycling Center Move Approved — The Four Mile Run Drive self-serve recycling center will soon be moving to the Arlington Trades Center, as expected. The County Board unanimously approved the move at its Tuesday night meeting. “County workers will be better able to monitor recycling at this location, to make sure the site is maintained properly and remains litter-free,” said Board Chair Libby Garvey. [Arlington County] 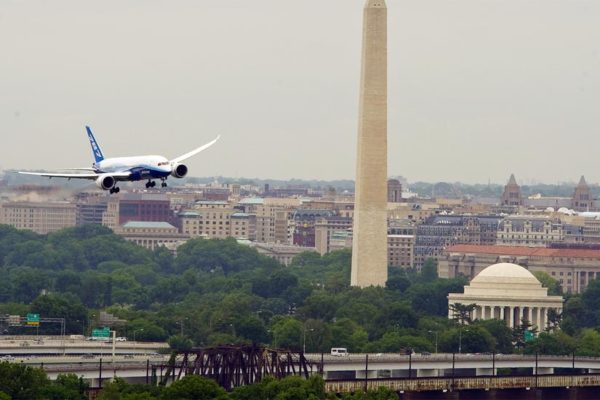 A Boeing 787 Dreamliner landed at Reagan National Airport around 10:50 this morning as part of an international promotional tour for the aircraft.

The widebody jetliner (wingspan: 197 feet) will spend the next few days parked at the airport, before departing on Friday morning, according to Boeing. Government and airline officials and members of the media are among those expected to be invited to tour the aircraft during its time at DCA. No public tours are planned.

According to Boeing, the jetliner — first put into commercial service in October 2011 — is outfitted with “special cabin features including a welcoming entryway, dramatically larger dimmable windows, bigger bins and dynamic LED lighting.” The 787 is noted for its use of lightweight composite materials, which helps make it 20 percent more fuel efficient than similar-sized airliners. It’s also designed to be quieter and  more comfortable for passengers than older models.

Today’s landing (see: video) was unusual for Reagan National, since widebody aircraft typically do not operate out of the airport. The plane will depart DCA for Dallas, Texas on Friday.

Last fall the Arlington County Board approved plans for Boeing to build a new regional headquarters near Crystal City. 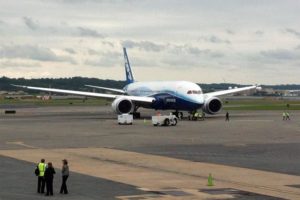 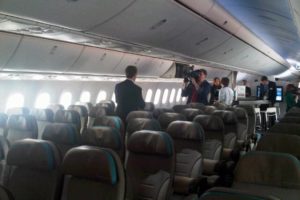 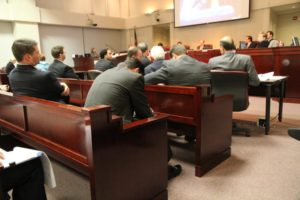 It was 12:50 a.m. by the time the Arlington County Board adjourned last night, having spent three hours debating a proposal for aerospace and defense giant Boeing to build a new regional headquarters complex near Crystal City.

After a lengthy back-and-forth discussion, the Board voted unanimously to approve the project, which won high marks for its economic benefits to the county but which was strongly opposed by the county’s own citizen-led transportation and planning commissions.

The Boeing complex, which the company will own instead of lease, won’t provide the kind of active streetscape befitting a property so close to a multi-million dollar county park and recreation center, opponents said. Instead, the property will be largely closed off to the public; buildings will be set back from the sidewalk with no ground floor retail and no public-use parking spaces (which could have been utilized during special events at the park). Transportation Commission Chair Bill Gearhart called the complex, which will have 555 underground parking spaces, “auto-oriented” as opposed to transit-oriented. The Planning Commission called the architecture of the proposed buildings “mediocre.”

“If this project is approved, the County would be setting a precedent that it is okay to shred everything in order to keep a company that is not working, living or playing well with its neighbors,” the Planning Commission wrote.

But Boeing supporters — including county staff, Arlington Economic Development, and the Crystal City Business Improvement District — argued that the hundreds of jobs and millions in annual tax revenue that will be generated by the new Boeing complex represents significant a benefit to the county that more than justifies the shift in land use goals required to approve the project. 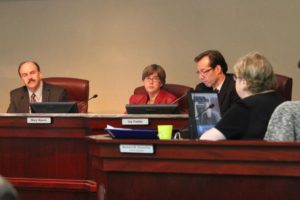 “I think tonight presents us a unique opportunity in recruiting and retaining a major employer,” said County Manager Barbara Donnellan. “At a time of increased economic uncertainty, this level of commitment to a major employer is critical to the county’s future economic sustainability, especially in Crystal City, where the future impacts of BRAC are yet to be seen.”

In pushing for the proposal’s approval, however, even Donnellan admitted that it “was not without controversy.”

“I acknowlege that my recommending steers slightly away from some of our urban planning ideals,” she said. “But I believe we’re facing a set of extraordinary circumstances.”

Supporters made the case that the plan for mixed-use development on the proposed site — two run-down square blocks of abandoned industrial buildings and a shuttered, deteriorating hotel — was unrealistic in the near-term. Waiting years for market conditions to be right for a high-density mixed-use development, some said, could jeopardize the county’s plan to build an aquatics center as part of the second phase of the Long Bridge Park project. As part of the agreed-to Boeing proposal, financially-challenged developer Monument Realty will engage in a land swap with the county that will allow the aquatics center to be built.