Arlington police say they’re working with the FBI after two pipe bombs were found in a Ballston home. 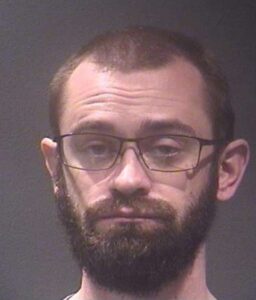 The discovery was made Tuesday afternoon after police arrested 34-year-old Ryan Bosnick, while he was walking back to his house on the 1100 block of N. Stuart Street. Bosnick had been accused of making violent threats and possessing a sawed-off shotgun that he reportedly showed to friends at a Clarendon restaurant the day before.

The county bomb squad safely removed the pipe bombs from the home last night. Bosnick is being held without bond on numerous charges.

ACPD said in a press release this afternoon, below, that they’re conducting a joint investigation with the FBI. There is “no apparent ongoing threat to public safety,” police say.

The Arlington County Police Department is announcing the arrest of a suspect following an investigation into threats and the recovery of two improvised explosive devices (commonly referred to as pipe bombs). Ryan Bosnick, 34, of Arlington, VA, was arrested and charged with Possession of Explosive Materials or Devices (x2), Possession of a Sawed-Off Shotgun, and Threats of Death or Bodily Injury to a Person. He is being held without bond in the Arlington County Detention Facility.

At approximately 7:47 p.m. on March 22, police were dispatched to the 1000 block of N. Fillmore Street for the report of an individual making threats. Upon arrival, it was determined that the two witnesses were eating at a restaurant when the suspect joined them for drinks. As they were conversing, the suspect made threatening statements to harm individuals known to him. The suspect later opened his backpack and revealed what was described as a two-piece shotgun made from metal pipes and a bag containing suspected shotgun ammunition. Upon leaving the restaurant, the witnesses reported the incident to police. During the course of the police investigation, officers identified the suspect and made contact with the female victim who was one of the targets of his threats. The victim revealed the suspect had also been sending her threatening text messages. A warrant for Threats of Death or Bodily Injury to a Person was obtained for the suspect at that time.

On the afternoon of March 23, officers took the suspect into custody without incident as he was walking in the area of Fairfax Drive and N. Stuart Street. At approximately 3:40 p.m., officers executed a search warrant at the suspect’s residence located in the 1100 block of N. Stuart Street. During the execution of the search warrant, a homemade sawed-off shotgun and two improvised explosive devices were located. The Arlington County Fire Department’s Bomb Squad responded to the scene and assisted with the removal of the devices from the residence.

Federal authorities from the FBI Washington Field Office responded to the scene and this remains an active joint criminal investigation. There is no apparent ongoing threat to public safety. Anyone with pertinent information related to this incident and/or the suspect is asked to contact the Arlington County Police Tip Line at [email protected], or anonymously to the Arlington County Crime Solvers hotline at 1-866-411-TIPS (8477)

“Are you available for a vehicle search, 66 and 495, to assist state?” screeches the police radio.

Cpl. Dave Torpy with the Arlington County Police Department receives a call from dispatch regarding a potential drug situation in Fairfax County. He confirms he can respond to the mutual aid call and heads out to his car to join his partner waiting inside. But his is no ordinary partner. Torpy gets to work with Ozzie, one of ACPD’s K-9 members.

The two head to the scene and find state police waiting for them. State police had pulled over the driver of a truck who was spotted wrecking one of his front wheels when he crashed into a jersey barrier. The driver allegedly kept going until he was pulled over, and police suspected he was under the influence of some sort of substance. Torpy and Ozzie were requested from Arlington because no other K-9 teams were available in Fairfax.

Torpy walks Ozzie to the vehicle and indicates places to sniff by leading his hand close to, but not touching, certain areas. He explains that officers are not allowed to search inside a vehicle without a warrant, but the law allows the investigation of the vehicle’s perimeter. Should a K-9 partner “hit” on a scent of drugs wafting from inside the vehicle to the outside, that’s considered probable cause and officers may perform a full search. 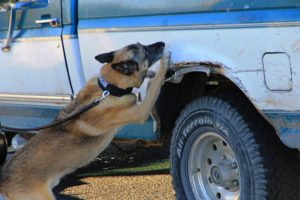 He points out areas where dogs often pick up drug scents emanating from inside, such as along door cracks or crevices in the vehicle body. But Ozzie doesn’t need any leading and pulls Torpy to a different portion of the vehicle. Ozzie stands up on the side of the truck bed, scratching and emitting low growls.

The multiple instances of scratching and barking are exactly what police look for; those actions are what the dogs are trained to do when they smell drugs. That is the permission police need to open this particular vehicle for probable cause and to continue their search.

Ozzie is allowed inside the vehicle and he repeatedly sniffs and scratches at the sun visors and along cracks around the door. Torpy explains those are two common places for suspects to stash drugs quickly when they’re getting pulled over by police.

When it’s clear that Ozzie smells something out of the ordinary, he’s led back to the ACPD cruiser to wait. It’s now time for humans to take over and to continue the search for illicit substances. Once humans enter the equation, dogs typically are not brought back in. Humans searching for items might spread the scent from a “hot” area to places where nothing was hidden. Bringing in a dog at that point could yield, for example, a dozen hits in a vehicle that previously only had one.

“He really likes this vehicle,” Torpy said. “He paid attention to the open window a lot and actually barked and scratched along the seams. If you weren’t initially looking for dope, you wouldn’t necessarily look at the seams. But his nose took us there so we can search further.” 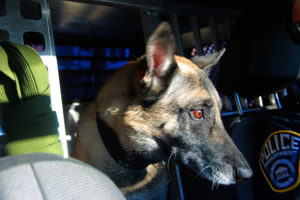 Ozzie, a Belgian Malinois, is one of the nine dogs in ACPD’s K-9 unit. Seven are “dual purpose” or patrol dogs that assist with building searches, evidence recovery, criminal apprehension and narcotics detection. Two are trained solely to detect explosives; one bomb detection dog belongs to a crime scene agent and the other belongs to a school resource officer.

Most of the dogs are purchased from reputable breeders in Europe, but the two bomb dogs were rescues. One was adopted from a shelter in Loudoun County and the other was donated by a family that could no longer care for the dog.

Sgt. John McCarthy is also a dog handler and supervises the K-9 unit. McCarthy goes out on calls with his partner, Charly, just like all the other K-9 unit members, but he also oversees the unit’s operations. He handles scheduling, helps with handler and dog hiring, and purchases supplies like food and toys.

Prior to his appointment in 2007, the department did not have a supervisor for the unit. Arlington County Police Chief M. Douglas Scott was instrumental in adding the position and with expanding the K-9 unit to allow for nearly 24-7 police dog coverage.

“When I was doing a review of the units, I saw at the time we only had four dogs. They were not really a full unit they were just on squads,” said Scott. “I didn’t think it was an effective way to run the program.”

Scott joined the department in 2003 and approved the addition of two dual purpose dogs in 2004, two bomb detecting dogs in 2006, and McCarthy’s supervisory position including a dog in 2007.

“We’ve done it all gradually by converting existing positions,” said Scott. “I didn’t want to be going to the County Manager or County Board asking to add new positions. I made the case internally and started the expansion that way.”

The current price of a police dog runs around $7,000 plus the cost of continuous training. Those working in the unit, along with Chief Scott, believe it’s a wise investment.

“K-9 to me has always been something I would describe as a force multiplier. Their ability to get in and search a building, do a track, is so much better than using multiple officers or for officers to be doing a blind search. They’ve proven themselves time and time again,” Scott said. “It’s well worth the investment.” 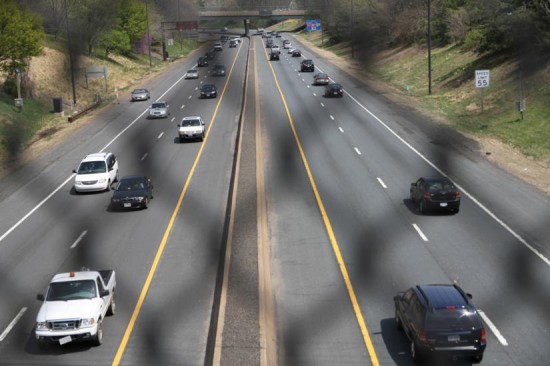 More Funds for Long Bridge Park — The county board is slated to decide whether to spend an additional $4.7 million to move forward with planning for an aquatics facility facility at the future Long Bridge Park, near Crystal City. [Sun Gazette]

Man Arrested in Metro Bomb Plot Sentenced — An Ashburn man who thought he was helping to plan a bombing of the Metro system was sentenced to 23 years in prison yesterday. Farooque Ahmed, 34, was accused of providing undercover federal agents with sketches, photos and videos of the Pentagon City, Courthouse, Arlington Cemetery and Crystal City Metro stations in what he thought was a plot to bomb the stations. [Washington Post] 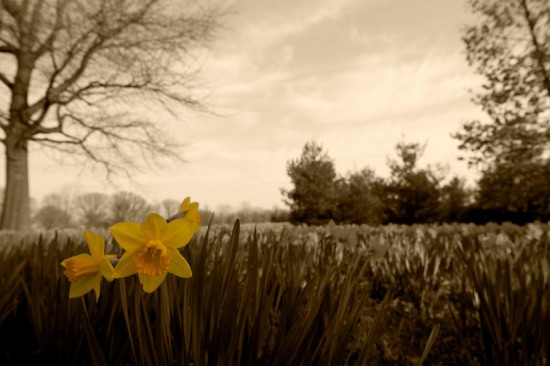 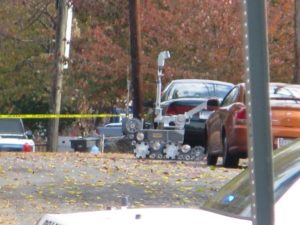 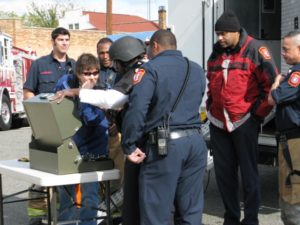 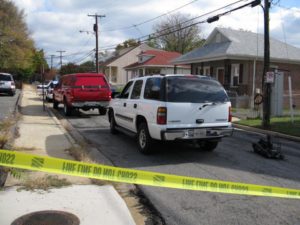 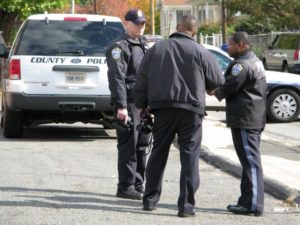 (Updated at 1:15 p.m.) Bomb disposal crews used a remote-controlled robot to neutralize a suspicious device on 17th Street in Nauck, a block away from the busy intersection of South Glebe Road and Walter Reed Drive.

Explosive specialists determined that the device, which was white, cylindrical and had wires coming out of it, was a hoax, but only after they used an explosive charge to “interrupt” it.

Authorities were first notified of the device, which was placed between two cars on the side of the street, around 10:30 this morning.

The bomb squad arrived “and found what appeared to be an improvised explosive device,” according to Arlington Chief Fire Marshal Benjamin Barksdale. Authorities cordoned off the area and had dispatchers implement a “reverse 911,” which notified residents in the area about the situation and asked them to stay in their homes.

“From there we went through our normal procedures as to identifying exactly what we were dealing with… and from there neutralizing the object,” Barksdale said. Arlington first responders were joined by resources from neighboring jurisdictions, he said.

Barksdale said the last such bomb scare in Arlington happened 3-4 months ago in Crystal City, when a suspicious package was found and neutralized using the same procedures. That device also turned out to be a hoax.

Investigators will now focus on determining who might have been responsible for the device.

“We’ll be talking to people who live on the street to see if they saw anything suspicious, any individuals who don’t live in this neighborhood,” Barksdale said.