Bowlero — a bowling alley, arcade and restaurant — is hoping to roll into 320 23rd Street S. in June.

That’s according to a staff report to the Arlington County Board. The Board approved a renewal of the site’s use permit at its Jan. 25 meeting.

“Since initial County Board approval of the use permit in January 2019, the applicant has informed staff that the use has not commenced operation,” staff said in the review. “The applicant anticipates opening in June 2020.”

The chain has several bowling alleys in the region, the closest being a brand new location in Annandale, at 4245 Markham Street.

More on Bowlero’s plans from its original 2018 press release:

The brand-new Bowlero, totaling 44,000 square feet, will bring the best in bowling, epic events, and exceptional eats to Crystal City and its neighboring communities. Situated just a block away from the city’s eclectic 23rd Street Restaurant Row, Bowlero will add its unique spin on fun and enhance the area’s growing entertainment landscape.

The new location will introduce residents of Crystal City to Bowlero — Bowlero Corp’s retro-inspired brand — and will increase the brand’s already considerable presence in the region, with nearby Bowlero locations in Bethesda, MD, Leesburg, VA, and Centreville, VA.

A new bowling alley is delaying its plans to open in Crystal City by a year.

“The Bowlero location is undergoing construction,” Jillian Laufer, a PR rep for Bowlero Corp., said in an email. “But there are tentative plans for the center to open in spring 2020.”

Bowlero is a bowling alley and restaurant chain with three locations in Northern Virginia. The location at 320 23rd Street S. is described as family friendly, though plans for the Crystal City location include a bar. A press release from the organization said Bowlero features blacklight bowling lanes, lounge seating, and an interactive arcade.

The Queen Ammanisa Uyghur restaurant previously in the location has since vacated, though signs for the restaurant remain in the windows. Inside, the space has been gutted.

Laufer said the delay is caused by construction “taking longer than anticipated.” The location was originally slated to open “mid-2019.”

Arlington officials could soon clear the way for a new bowling alley and arcade to set up shop in Crystal City.

The County Board is set to sign off this weekend on plans to open a new “Bowlero” location in the base of The Buchanan apartment building at 320 23rd Street S.

The bowling alley announced plans to expand to the neighborhood last fall, and is now lining up the permits it needs to convert nearly 52,000 square feet of space into a combination entertainment center and full-service bar and restaurant.

Bowlero is now set to move in next to the existing Bar Louie restaurant and Legal Seafood, taking the place of the tech company GDIT and the Queen Amannisa Uyghur restaurant.

According to plans included in a county staff report, visitors will enter the establishment from 23rd Street S., passing through a large video game arcade space. A full bar will sit at the center of the space with as many as 32 bowling lanes surrounding it, according to the report.

County staff are generally supportive of the company’s plans, writing to the Board that the bowling alley will “increase the livelihood of the area, provide diverse cultural and civic facilities to a vast array of demographics and will be an overall quality addition to Crystal City.”

The Board is set to vote on permits attached to the project at its meeting Saturday (Jan. 26). The matter is slated for the Board’s consent agenda, generally reserved for non-controversial items that pass without debate.

Bowlero previously said it was hoping to open the new location sometime in “mid-2019.” The company also operates locations in Centreville and Leesburg.

Should it win the permission it needs, Bowlero’s addition to the neighborhood will be one in a series of big changes for this section of Crystal City.

Not only have several new restaurants, including Federico’s, Los Tios and Fiona’s Irish Pub, decided to set up shop along 23rd Street S., but JBG Smith is also planning on adding an Alamo Drafthouse and other retail offerings nearby as part of its “Central District” project.

The bowling center at Joint Base Myer-Henderson Hall is getting a few upgrades, but that means construction will restrict access to its lanes this week.

The Army base announced Monday (Jan. 7) that it would be kicking off work to “add new counters at the Strike Zone and Front Desk locations” within the bowling center.

The downside, however, is that the bowling alley will “experience limited operations and/or closures” through Friday (Jan. 11).

The bowling center last garnered headlines back in 2016, when officials moved to restrict access to its lanes only to people escorted by someone with a Department of Defense ID.

However, anyone hoping to bowl or otherwise gain access to the base on a regular basis can apply for a special pass to do so.

A new bowling alley and restaurant is on the way for Crystal City.

Bowlero plans to open in a 44,000-square-foot space in the base of The Buchanan apartment building at 320 23rd Street S., per a press release. The company is targeting a “mid-2019” opening date, with construction set to start within the month.

The bowling alley will be Bowlero’s third in Northern Virginia, joining locations in Centreville and Leesburg. Per the release, Bowlero “features blacklight bowling lanes, laneside lounge seating, and [an] interactive arcade, all in a family-friendly setting,” and offers a full menu and bar.

Bowlero will move into a space once occupied by the tech company GDIT, and the Queen Amannisa Uyghur restaurant. The fate of the restaurant is a bit murky, however — a sign on the door says it will be relocating to a space next to Legal Sea Food, just down 23rd Street S., but a staff member would only tell ARLnow that the restaurant is currently undergoing renovations, and would not confirm the move.

The only other location adjacent to the Legal Sea Foods is an empty storefront along S. Clark Street between Legal Sea Foods and Virginia ABC. The site was once a Chiles, which closed in 2016.

Bowlero’s arrival in the neighborhood comes on the heels of a spate of changes for the 23rd Street corridor in Crystal City.

Not only are there new restaurants popping up like Federico’s and Los Tios, but JBG Smith is planning on adding an Alamo Drafthouse and other retail offerings nearby as part of its “Central District” project.

With the new year, some Arlington residents are finding Joint Base Myer-Henderson Hall’s recently-updated access policy also extends to the base’s bowling center.

According to an ARLnow.com reader, civilians are no longer allowed to bowl on base, in leagues or otherwise, except in certain circumstance. He said he and his friends have been bowling on base for years without incident.

“I’m told the bowling leagues were decimated since many team members were civilians,” the tipster said.

Civilians who are not escorted by someone with a Department of Defense ID are not being allowed on base to bowl, unless they have a special access pass, Robert Joswiak from the JBMHH public affairs office confirmed.

Joswiak said the security policy has not changed since it was updated nearly a year ago. Last summer, the same policy caused a stir among local cyclists who could no longer ride through base without first applying for and receiving an Automated Installation Entry (AIE) pass.

“Joint Base Myer-Henderson Hall takes every precaution to assure the safety and wellbeing of joint base residents, personnel and visitors,” Joswiak said. “Non-affiliated members of the public are being turned away — no matter their intent of entering the base, bowling center or otherwise — because they either do not have an DoD ID, or are not being escorted by someone with a DoD ID, or do not have an AIE.”

Civilians, cyclists and bowlers can apply for an AIE for base access. If they do so with the sponsorship of a family member or friend with a valid Department of Defense ID, the approved AIE could be valid for up to one year. A non-sponsored AIE pass is valid for 60 days with the option to reapply after that time is up.

Joswiak added all non-affiliated individuals — those without a DoD ID who are not being escorted by someone with a DoD ID — must have a valid reason to enter the base and are subject to vetting. It is likely members of the public will be turned away unless they are escorted or have an AIE. 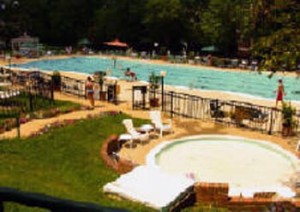 (Updated at 4:50 p.m.) If you’re a federal government employee, you’re now eligible to go swimming at Joint Base Myer-Henderson Hall.

The military base announced a policy change today that will open up most recreation facilities there to non-Department of Defense federal employees. Among the facilities that federal workers can now take advantage of are the Fort Myer Bowling Center and the Fort Myer Officers’ Club. The club has a swimming pool, tennis and racquetball courts and fine dining facilities.

Federal workers don’t have to be an Officers’ Club member to use the facilities, but they will have to pay a non-member fee. Official government ID is required to access the facilities. The policy change announced today also allows federal employees to join the Officers’ Club, if they wish.

The fitness centers and child development center at Fort Myer will continue to be for DoD personnel only.

The Officers’ Club and the bowling center can be accessed through the Joint Base Myer-Henderson Hall Hatfield Gate.