Customers walking into the house-turned-shop alongside S. Fern Street are immediately met with a hand-drawn greeting that says, “You Look Beautiful.”

“I wanted to create a space where everyone would feel welcome,” said owner Rhoda Wheeler.

Wheeler, who worked for years as an English teacher for Fairfax County Public Schools before moving into real estate marketing, always wanted to take her love of fashion to the next step.

“I live in this neighborhood,” said Wheeler, “And as I was walking to dinner with my husband one night, I saw the ‘For Rent’ sign, and the rest was history.”

The store accepts upscale brands such as Louis Vuitton and Hermes, along with clothing consigned from department labels Neiman Marcus and Nordstrom, among others.

“I’ve always had a passion for thrifting and thinking about how we can reuse things,” she said. “I think fashion and style are fun, but I understand the need to make things last for a very long time.”

Agents in Style also features an affordable selection from the LA-based clothing company Ellison Apparel. Items such as a green suede jacket and a leopard-print skirt might not appeal to the same audience as those shopping for say, Chanel, but it’s a part of Wheeler’s vision for a more accessible store.

Wheeler hopes the store can be used as a space for all kinds of community events, from fundraisers to book clubs. For example, on Thursday, October 17, all proceeds from the store will go towards the American Cancer Society. 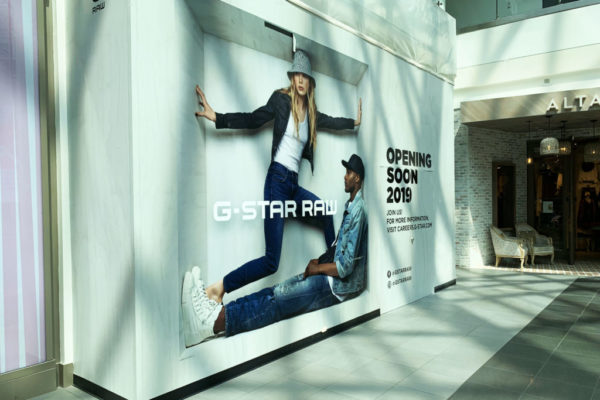 Update at 5:15 p.m. — The store is actually expected to open next week, a PR rep says, correcting an error in an earlier press release.

The “eco-friendly, luxury denim brand,” as a press release describes it, is expected to open next to the Victoria’s Secret on the first level of the Fashion Centre at Pentagon City.

The Dutch fashion brand is a destination for Canadian tuxedo enthusiasts, in addition to celebrities and race car drivers. G-Star RAW sells jeans, denim shirts and jackets, in both men’s and women’s varieties, in addition to an array of non-denim clothing and accessories.

Customers walking into the new luxury shoe store “JŪS4thqtr” on Lee Highway may be surprised to be greeted by a wall of juice bottles.

The real way in is through a refrigerator door, which pushes open into a showroom with illuminated shelves of footwear and display cases holding high-end fashion.

Founders Shadi Ello, 24, and Mohamed Sha, 27 told ARLnow that the speakeasy entrance is all part of a feeling of “community engagement” they wanted to cultivate since opening last month. It’s also why they show only display shoes, Ello said, to encourage customers to ask store employees about sizing and color options.

“The minute someone puts that on their foot, it’s a wrap,” said Ello, who explained the store only carries “deadstock,” or never-before-worn sneakers purchased from retailers. “This is not a Foot Locker.”

The store is located in an unassuming, low-slung shopping center at 5139 Lee Highway. Initially, Ello said he was worried about attracting enough customers to a high-end boutique in “deep Arlington” but so far they’ve had enough customers to start running out inventory.

JŪS stocks about 4-5 glow-in-the-dark Yeezy 750 Boosts that run $1,000 and several sneakers from the Off-White Airmax 90 collection for $750. For women, there’s a selection of kicks from Adidas and Travis Scott in size 5 for $500.

The most expensive shoe is the ‘Not For Resale’ Air Jordan 1s selling for $1,500.

“The shoes just generate foot traffic,” said Ello, who acknowledged many of the shoes “are outrageously priced” by design. Most of the store’s revenue comes from its apparel, he said.

The clothing sold at JŪS includes a $35 JŪS-branded shirt, $200 for a leather body vest from Maryland designer Daniel Green’s brand “Insane Cult”, and a $1,000 Dior sweatshirt.

Ello, who grew up in Arlington and attended Wakefield High School, expected most of his customers to be in high school or their mid-20’s, and was surprised by the number of middle schoolers shopping to resell kicks.

He jokes that the 11-year-olds “like to give me a hard time” about the prices but he enjoys them coming by.

“It’s not illegal, and it’s keeping them in a safe, clean environment selling shoes,” he said.

Ello, Sha, and a third co-founder say they signed a lease in the shopping center six months ago.

After three weeks of steady business, they say they’re working on turning the basement into a space for photo shoots and pop-up fashion galleries. The store’s Instagram account has already filled with some of the modeling shots.

A new women’s fashion boutique is on the way for the Pentagon City mall.

Signs posted in a space on the third level of the Fashion Centre at Pentagon City advertise that Windsor will soon open in the mall. The shop will be located next to a Lids location and the Life in D.C. store.

Windsor is set to open by April 1, according to the mall’s website.

The store is “a family-owned business dedicated to fostering a shopping environment that celebrates a woman’s unique personality,” the site says. It offers dresses, tops and bottoms, jackets, accessories and more.

This will be Windsor’s first location in Arlington, but third in the Northern Virginia area. It also operates stores at the Tysons Corner Center mall and the Fair Oaks mall.

The annual Crystal Couture fashion show in Crystal City will return this weekend.

The free event includes models walking the catwalk in fashions from local designers, plus more than two dozen pop-up shops from local boutiques and designers. There will also be a bar and free five-minute makeup and hair makeovers.

The event includes a pop-up clothes store as well as the fashion show. Organizers said around 50 local boutiques, retailers and designers will be showcased.

“This one-stop shopping experience lets guests browse discounted offerings on the rack AND on the runway as models showcase select offerings while enjoying sips from the bar and free five-minute make-up and hair makeovers,” organizers wrote.

And for those who wish to get on the catwalk, casting got underway for Crystal Couture late last month. Planning has also started, including producer Maggy “Fancy” Francois.

From politicians to fashion bloggers, Arlington is home to a variety of social media influencers. One common thread among them? Many run their social media feeds like a business.

Angelica Talan, a resident of the Courthouse-Clarendon area, created the blog Clarendon Moms in 2011. Talan often frequented restaurant launches or book signings in the area but noticed she was the only mother present. She created Clarendon Moms as a resource for other Arlington-based mothers to learn about these free events.

The blog eventually expanded to include travel, fitness and fashion advice, and two years later, she began to profit from sponsored posts.

“It was never my intention,” Talan said. “I really just wanted to connect people with what was going on. Never in a million years would I have guessed that you could combine your passion for writing, photography, mingling with people and connecting people, create a blog and make money.”

In 2016, Talan’s friends helped her realize she needed to create a second blog, Angelica in the City, which is geared towards single women instead of mothers. Both of Talan’s blogs strive to promote positivity and an educational purpose.

“On Instagram if you don’t have a good picture people are going to go right past it,” Daveport said.

They launched a website last September, which has the best places to eat, explore and buy a home. The couple started hosting events with local businesses in January.

Sarah Phillips of Arlington’s Penrose neighborhood and Michelle Martin, who lives in Los Angeles, began their fashion blog 52 Thursdays as a hobby.

Both women studied fashion in college, where they were sorority sisters. In 2013, they decided to create a business revolving around that shared passion.

“We came up with 52 Thursdays because our wine nights were on Thursdays,” Phillips said.

At first they did not share the website with anybody. Months went by and the women decided to give their web page a makeover: they organized a photo shoot at a studio and hired a professional photographer.

Now, the women partner with various brands to make a profit. They enjoy working with small businesses in Arlington such as South Block and LavaBarre. The women also offer fashion, blogging, branding and social media consultations as well.

END_OF_DOCUMENT_TOKEN_TO_BE_REPLACED

Crystal Couture is back for another year.

The annual fashion show and sale in Crystal City kicked off last night on the sixth floor of 2200 Crystal Drive. The event features models walking the catwalk, showing off the work of local designers. There is a bar, a DJ, numerous boutiques and free make-up and hair makeovers.

Crystal Couture is free to attend. 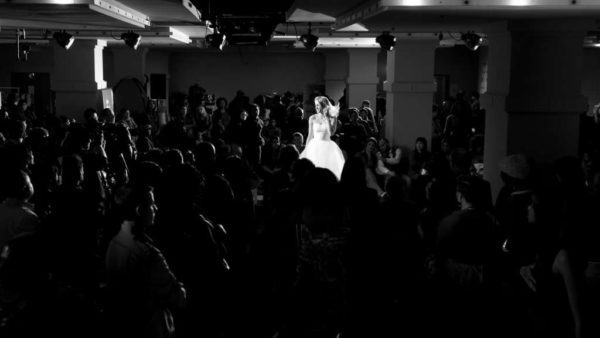 Crystal Couture is always free to attend and shop amazing designer discounts, but bargain-savvy shoppers can upgrade to the Crystal Couture VIP ticket for an enhanced show and sale experience.

Ticket holders receive an exclusive VIP gift bag, $20 of Couture Cash to spend at any retailer at Crystal Couture, and access to an open bar serving beer and wine (valid during VIP hours on Saturday from 2-6 p.m. only).

The Crystal Couture VIP ticket is $20 online and $25 at the door (if available), but through today’s ARLnow Deal of the Day, you can get a ticket for your shopping buddy, spouse, or partner for FREE with the purchase of your own ticket.

Be sure to purchase your tickets now — this deal is only available through Friday evening!

END_OF_DOCUMENT_TOKEN_TO_BE_REPLACED

The Canadian yoga pants purveyor’s new, apparently temporary location is on the second level of the mall, above the food court. The store will be holding a grand opening celebration this weekend.

“The window wraps are down and we are thrilled to be joining the Pentagon City community for the holidays,” says a Facebook page for the grand opening. “Whether you need advice on the best wear to support your winter adventures and sweaty pursuits, or simply need to take a few deep breathes during your holiday shopping, our doors are O P E N.”

Lululemon has an existing, permanent location in Clarendon.