A new program seeks to increase equity in Arlington by planting more trees in certain neighborhoods.

The local non-profit EcoAction Arlington announced that it’s starting the “Tree Canopy Equity Program” with the goal of raising $1.5 million to fund planting at least 2,500 trees over the next five years in local neighborhoods that have too few.

Insufficient tree canopy is closely tied to heat and temperature increases. The reason certain areas of Arlington are hotter than others, like the Rosslyn-Ballston corridor, is due in part to lack of trees, recent data shows.

“The neighborhoods most impacted by insufficient tree cover are communities with higher-than-average minority populations and communities with people living in poverty,” EcoAction Arlington said a press release. “The lack of trees has a real-world impact that can lead to poor physical and mental health outcomes, higher utility costs, and a lower quality of life.”

The ten civic associations and neighborhoods that the program will work with are below.

The current levels of tree cover in those neighborhoods is between 17% and 33%, according to EcoAction Arlington.

“The goal is to radically increase tree planting in the neighborhoods with the lowest tree cover to align with the average for other Arlington communities of approximately 40 percent,” the press release says.

The program needs about $150,000 a year to cover operations, marketing, staffing, and the actual planting of trees, Hodges says, with each tree costing about $500 to plant.

Amazon, an inaugural sponsor, has already contributed $50,000. The goal is to raise $1.5 million from other corporate and individual donors, while also obtaining funding from Arlington’s existing Tree Canopy Fund Program. This initiative allows neighborhood groups, owners of private property and developments, and places of worship to apply to have native plants or trees planted on their property.

Residents in neighborhoods lacking sufficient tree canopy note that the the problem is often tied to the construction of large, new homes and not prioritizing trees while building.

“As we lose trees due to infill development of large homes on lots in our neighborhood, they need to be replaced and even expanded,” John M. Langston Citizens Association president Wilma Jones tells ARLnow. “We all know that trees give off oxygen and they reduce stormwater runoff.

Natasha Atkins has been a resident of Aurora Highlands for nearly four decades and has “watched with alarm” the number of trees lost to homebuilding projects.

“With the County’s zoning code, requiring only very small setbacks for residential housing, it is questionable whether there will be much of a tree canopy in the future in the single-family neighborhoods that are being redeveloped,” she says. “Trees are an afterthought in planning and zoning. They should really be a driver.”

Hodges concedes that planting 2,500 more trees over the next five years will only “make a dent” and it will take tens of thousands of trees for all these neighborhoods to reach the 40% tree canopy threshold.

“It’s about behavioral change and teaching people about the importance of having a sufficient tree canopy in Arlington,” she said.

Sunrise Senior Living is looking to rebuild, expand and modernize a decades-old facility in Arlington that serves people with memory impairments such as Alzheimer’s.

Members of the Long Range Planning Committee (LRPC) said last Wednesday that they need to study the site more as part of their review, but neighbors are voicing concerns about expanding the facility at 2000 N. Glebe Road in the Glebewood neighborhood.

“There’s a great need for this type of housing in Arlington today, and it’s likely to only get worse in the future,” said Clyde McGraw, Sunrise’s senior director of real estate, development and investments, during the LRPC meeting.

Sunrise’s facility is in a neighborhood that’s designated as “low residential” and is currently legally nonconforming, county staff told committee members. As such, the organization needs permission for the proposed redevelopment.

An initial proposal calls for keeping the property three stories and adding an underground parking garage. If the county requires the facility to be set back farther from the road as part of the redevelopment, a fourth story may be needed to maintain or add units, according to McGraw.

The proposal looks to increase Sunrise’s residential capacity from up to 50 residents to somewhere between 85 and 90, he said. Changing the upward capacity limit, which the county set in 1986, would require a rezoning request, according to staff.

During the meeting, neighbors raised questions about Sunrise’s proposal to expand.

April Myers, who lives in a nearby townhome, said she’s okay with the current size of the facility, but is concerned with increasing it and questioned if that was the best path forward. Others expressed frustration with how the zoning code is applied in the neighborhood.

“Most of my neighbors cannot rebuild a porch because it’s nonconforming,” resident Cynthia Hoftiezer said. 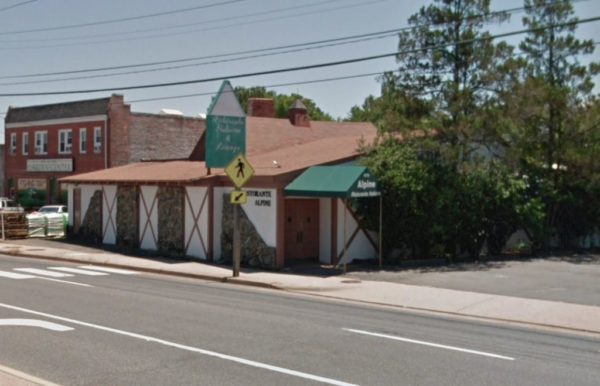 A community meeting is being held tomorrow night to discuss a proposed development that would bring The Children’s School to the former Alpine Restaurant site on Lee Highway.

The Children’s School, a subsidized daycare center for Arlington County teachers, is planning to relocate as its long-time home — the Reed School building in Westover — is renovated and turned into a new elementary school.

A flyer for the meeting — to be held at 7 p.m. Thursday at the Lee Highway Alliance (4620 Lee Highway) — says a three-story building has been proposed for the Alpine site, which has sat largely unused for the past eight years.

“Two-hundred thirty-five children, aged 0-5, would be housed in a three story building that tapers at the rear towards the Glebewood townhouses, with rooftop play areas,” says the flyer. “Integration Station, which is a pre-school for kids with special needs, would also be part of the application (about 30% of 235 children).”

“Daycare would open at 6:45 a.m. and close by 5 p.m — not open on weekends,” the flyer continues. “The site is approximately 19,400 square feet. This is a by-right application under a use permit. The preliminary drawings illustrate an attractive, glass-paneled contemporary and playful design for the school.”

The site is owned by Arlington businessman Brian Normile, of BCN Homes and Liberty Tavern, and would be leased to The Children’s School, according to the flyer. The Children’s School would temporarily move to Ballston during the approval and construction process, it says.

The flyer lists “impacts to Glebewood Historic District,” green space and tree coverage, and parking — the plan calls for 40 mostly underground parking spaces plus drop-off spaces — as some of the issues for further community discussion. 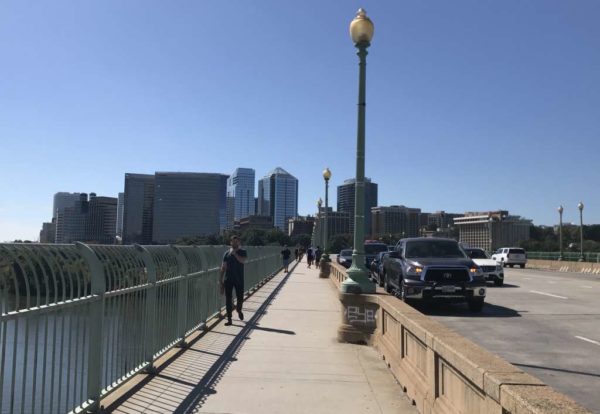 Police say the juvenile suspects were stealing bike from a bike rack in the area of Barcroft Park.

BURGLARY, 160717025, 2100 block of N. Brandywine Street. At approximately 1:30 p.m. on July 17, two homeowners returned from a vacation to find a known individual and an accomplice in their residence. After the individuals left, the female victim discovered several items of value to be stolen. Officers located and apprehended the suspects a short time later. Margarita Denison, 34, of Alexandria VA, was arrested and charged with burglary, breaking and entering, and grand larceny. Matthew Pair, 30, of Waldorf MD, was arrested and charged with burglary, grand larceny(x2), and possession of methamphetamine.