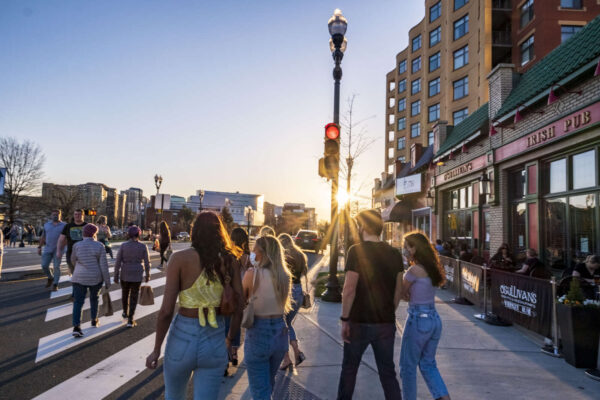 Amazon Workers to Volunteer at Vaccination Site — “The company sent out an opportunity for employees to volunteer at the clinic on one of its listservs, and pulled in workers from all around the region, including those at Amazon Web Services, which has a hefty Herndon presence. Roughly 50 Amazon employees will help run the clinic each day… While Arlington health workers will deliver the vaccines themselves, Amazon volunteers will perform other important tasks, like monitoring people for symptoms after they’ve received a shot.” [Washington Business Journal]

Capitol Rioter Photographed in Arlington — “[Michigan] resident Anthony Williams used Facebook to show off photos and videos of himself inside the U.S. Capitol, which gave law enforcement officials enough evidence to arrest him last week… Williams posted updates to Facebook as he traveled to Washington, D.C. He posted his location in Bedford County, Pennsylvania with the caption “Operation Storm the Swamp” and posed for a photo with five other men at a sports pub in Arlington, Virginia.” [MLive]

Rosslyn Building Set for Foreclosure Sale — “A Rosslyn office building that hosts one of President Joe Biden’s favorite sandwich shops is slated to be sold at a foreclosure auction, the latest sign of distress in Greater Washington’s commercial real estate industry… a public auction is scheduled to be held 11 a.m. Wednesday outside the Arlington County courthouse for 1500 Wilson Blvd., a 17-story, 261,360-square-foot office building that stands at the intersection of North Oak Street and Clarendon and Wilson boulevards in Arlington County.” [Washington Business Journal] 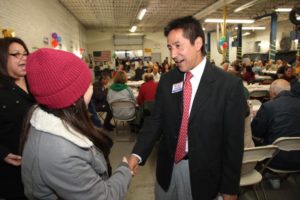 Candidates for local and state office in Arlington did some last-minute glad-handing at the 40th annual Kiwanis Club of Arlington Oyster Feast and BBQ on Saturday night.

Held at the American Service Center garage in Ballston, the feast attracted dozens (perhaps hundreds) of diners who paid $40 per head for unlimited oysters, burgers, hot dogs, barbeque and beer. Money raised at the event “helps to fund community youth projects and grants for other educational and non-profit organizations focusing on children in Arlington.”

The pre-Election Day event always attracts a large contingent of political candidates, who take the time to individually greet members of the civic-minded crowd — in between chowing down on fried food. Among the attendees was County Board member and state Senate candidate Barbara Favola, who’s facing off against Republican Caren Merrick in one of the most closely-watched local races in Northern Virginia.

Favola said she’s feeling optimistic heading into Tuesday, thanks to some unspecified internal statistics her campaign has been observing as of late. Merrick also attended the oyster feast, but we were unable to catch up with her for comment. 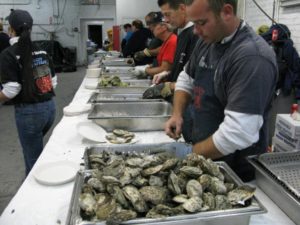 The annual fundraiser is traditionally an opportunity for candidates to put forth a last ditch effort to meet and win over voters. Some local officials even suit up and help serve at the all-you-can-eat event.

The event takes place tomorrow from 5:00 p.m.-8:00 p.m. at American Service Center (601 N. Randolph St.). Money raised goes toward the club’s sponsored youth program and other community organizations to help children. Tickets are $35 in advance and $40 at the door. 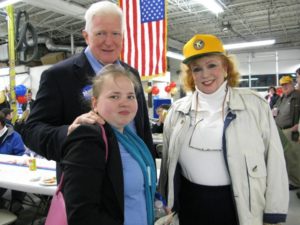 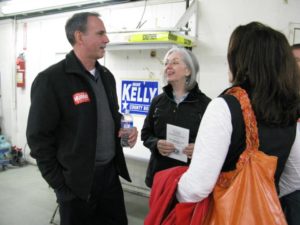 The candidates for public office in Arlington from congress on down all made the rounds at the Kiwanis Oyster Roast and Barbeque Feast on Saturday night.

Notable at the event was the “entourage gap.” Republican congressional candidate Patrick Murray brought a bus, a van, a dozen supporters and a guy dressed in an elephant costume. Incumbent Jim Moran brought, as far as we could tell, his chief of staff and a couple of family members.