An Alexandria man has died after losing control of his moped and crashing into a sign.

The crash happened in rainy weather around 5:40 p.m. Saturday, on S. Glebe Road near ramps to and from I-395.

At approximately 5:40 p.m. on April 22, police were dispatched to the 2400 block of S. Glebe Road for the report of a single-vehicle crash involving a moped. Arlington County Fire Department medics administered CPR before transporting Virgiliro Lopez, 45, of Alexandria, VA to George Washington University Hospital where he was pronounced deceased.

Detectives from the Critical Accident Team (CAT) responded to the scene. The initial investigation revealed the driver was traveling southbound on Glebe Road when he lost control of the vehicle and struck a traffic sign in the median. The investigation into the crash is ongoing.

Anyone who may have witnessed the crash or has additional information regarding this investigation is asked to contact Detective T. Parsons at [email protected] Information may also be reported anonymously to Arlington County Crime Solvers at 1-866-411-TIPS.

Glebe Road was closed or at least partially blocked for more than an hour following the crash, while police investigated. NBC 4’s Darcy Spencer tweeted the following photo from the scene.

(Updated at 11:00 p.m.) S. Carlin Springs Road was closed between 5th Street and 7th Road tonight due to a serious accident between a Jeep and a moped.

Around 8:00 p.m., the Jeep driver was trying to make a left turn onto 6th Road when the SUV and the moped collided, according to Arlington County Police spokesman Dustin Sternbeck. Officers arrived on the scene and found the moped rider, an adult male, lying on the ground. He was taken to a local hospital via ambulance with what were thought to be critical injuries.

According to Sternbeck, the man had a high level of alcohol in his system. He’s expected to recover from his injuries. The female driver of the Jeep remained on scene following the collision, Sternbeck said.

Carlin Springs Road was shut down for an extended period of time while police conducted an accident investigation. 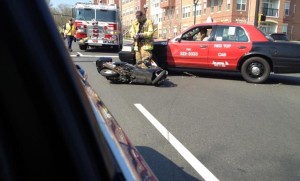 An accident involving a moped and a Red Top taxicab occurred around 3:15 this afternoon on S. Glebe Road, just north of I-395.

The scooter’s owner was largely uninjured and was not taken to the hospital, according to police. No word on which party, if any, was found to be at fault.

Southbound Glebe Road was partially blocked for 15-30 minutes during the accident response.