A deli and grocery store in Virginia Square will close today (Friday), but is expected to reopen next month.

A sign on the front door of Jen’s Kitchen (901 N. Nelson Street) said all its grocery items including beer and wine must go, with everything half-price.

But Jen’s is set to reopen in late January under new management, the sign reads.

The store between Starbucks and a dry cleaners, on the first floor of the Virginia Square Apartments and just feet from the neighborhood’s Metro station, sells hot food and fresh salad as well as breakfast, lunch and dinner.

It opened in 2015, replacing the former Metro Cafe and Gourmet.

A longtime pizza restaurant in Clarendon is soon to shutter and reopen under new management.

Signs posted on the doors of Faccia Luna at 2909 Wilson Blvd show it will soon become Alto Fumo, another Italian restaurant. Faccia Luna first opened in Clarendon in 1992.

Permit applications filed with Arlington County indicate that the restaurant is under new management, but for now little is expected to change other than the name.

“Alto Fumo means ‘high-rising smoke’ in Italian, like smoke rising from a pizza oven,” the sign reads. “You will enjoy the highest quality customer service and foods and also enjoy our new additions.”

Faccia Luna also has locations in Old Town Alexandria and State College, Pennsylvania. A sign on the door at the Alexandria location thanked customers “for all the support.”

In 2015, co-owner Joe Corey said Faccia Luna has been a spot for successful first dates, with hundreds of couples ending up married after eating together at the Clarendon pizza joint. 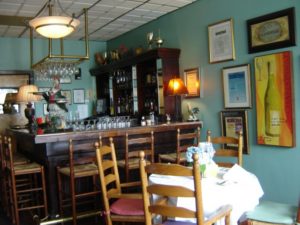 Chef Jacques Imperato bought the restaurant in February, according to a press release, and has since set about adding “more authentic French food options.”

Now on the menu: escargots, frog legs and foie gras.

The restaurant, located at 6876 Lee Highway, has been in business for more than two decades.

The well-loved restaurant, La Côte d’Or Café in Falls Church, has a new owner and is more authentically French than ever before. The restaurant was purchased in February of 2016 by Chef Jacques Imperato, the past owner-chef of three other successful French restaurants in Northern Virginia. Chef Jeanmarc Drimille who has been with La Cote d’Or for the past 13 years will still head up the kitchen.

Imperato’s changes include adding more authentic French food options from the province of Burgundy, providing an enhanced wine list, and refining recipes already on the menu. Some of the classics gracing the menu include:

Possibly the most exciting news is Imperto leading a return to excellent French wines at La Côte d’Or Café. The La Côte d’Or region in Burgundy is famous for some of the best wines in the world. The wine list has increased already to 22 wines, 14 of which are Burgundy, with more selections to come.

“I hope to educate people on real French cooking,” Imperto remarks in a classic French accent as pure as the day he arrived in the U.S. decades ago. “Everyone thinks of heavy creams in sauces when they think of French food, but there are many regions in France with different cooking styles. In Burgundy, we use olive oil and fresh herbs. Also, in La Côte d’Or Café we cook a healthier style of Burgundy cuisine using fresh seasonal ingredients, grass fed beef, specialty high quality fish and low calorie alternatives in our sauces.”

Some of these healthier sauce substitutes translate to a menu with many gluten free options. Also, everything on the menu is made from scratch, a practice that is a tradition in French cafe’s but not in typical North American restaurants.

The restaurant is perfect for date night with details that seem to be all too rare, like tables adorned with white linens and fresh flowers. During nice summer days, a wall of doors lining the sidewalk are opened, turning the atmosphere into that of a lovely Parisian cafe.

Imperato attended culinary school in Nice, France, and has worked with some of the most prestigious chefs known in the Côte d’Azur area today.

He has previously worked at Washington, D.C.’s Maison Blanche, Le Lavandou, and Tiberio. In the past, he owned Chalet de la Paix in Arlington as well as Mediterranee Restaurants in Great Falls and Arlington.

If you love La Côte d’Or Café, if you are a long-time follower of Chef Jacques Imperato’s flair for French cuisine, or if you would like to experience authentic cuisine from Burgundy, come and enjoy an exceptional dining experience. You can also contact them at [email protected] and ask to be put on the restaurant’s mailing list so you can receive a daily email with specials.

La Côte d’Or Café has been in business for over 20 years serving lunch and dinner daily from either à la carte or prix fixe menus. They alter the menu for certain holidays such as Mother’s Day. Saturdays and Sundays offer a special brunch menu. They can accommodate private parties up to 30 people in a designated party room. The restaurant provides catering as well.

A Indian restaurant serving only vegetarian food has reopened on Lee Highway with new owners and new name, though its sign may not reflect it.

“Arlington County is taking [a] little time to approve the signage,” Siddique said.

Siddique took over the restaurant in July and closed it for renovations in order to comply with Arlington codes, he said.

“We just acquired a restaurant that has been at this same location very successfully for the last 16 years, it has a pretty niche clientele and a following, we will like to seamlessly maintain that reputation,” he said. “We had to do small renovation to be compliant to the new code, but we have kept the look and the feel almost the same.”

Sharan Indian Cuisine serves only vegetarian food, a decision made by the previous owners, Siddique said.

Siddique describes the restaurant as having a “niche menu” because it serves dishes not typically found at Indian restaurant, including Pani Puri, Bhindi Jalfrezi and Masala Dhosa. The restaurant strives to maintain a comfortable atmosphere with affordable, homemade food, he said.

“We will like to invite the clientele of this restaurant who have been coming for the last 16 years to the same old charm vegetarian Indian food and also the new customers to come and try our cooking,” Siddique said.

Twisted Vines Bar and Bottleshop at 2803 Columbia Pike has a new owner and with it, a new menu and more drink options.

“Our whole concept that we’re working for is casual elegance,” said Tony Wagner, who took over on Aug. 10.

Wagner wants the place to be welcoming, with good quality food at “neighborhood prices,” he said. With his new concept of “casual elegance” in mind, Wagner and his staff have added new small plates, dishes and craft beers to the restaurant’s menu.

In addition to the small plates, which include new crab cakes, Wagner’s kitchen staff has also added flatbreads.

“We overhauled the menu completely,” Wagner said. “[We added] small plates that are absolutely delicious and pair well with the drinks.”

Wine, and to a lesser extent beer, have been the main attractions of Twisted Vines since it was opened in 2010 by previous owners Sybil and Josh Robinson. Wagner is expanding the drink menu by adding whiskey and bourbon drinks, as well as a new Bloody Mary for brunch, he said.

Under Wagner’s leadership, the restaurant has also started opening on Mondays, from 4-10 p.m., according to the restaurant’s Facebook page.

Twisted Vines is the first restaurant Wagner has owned, he said. The restaurant’s foundation had already been established by the Robinsons, giving him a good base to build on, he said.

Owning a restaurant has been “a passion for a while and the opportunity presented itself,” Wagner said.

New Ownership for Alpine Restaurant — Alpine Restaurant, the popular Italian eatery on Lee Highway in North Arlington, closed its doors on Sunday. After 44 years in business, owner Ermanno Tonizzo decided to sell the restaurant and retire. The restaurant will eventually re-open under new management. More from NBC Washington.

Small Fire at Reagan National — A scary moment for travelers at Reagan National Airport yesterday afternoon. A small fire broke out at a McDonald’s restaurant past the security checkpoint in one of the terminals. The fire was extinguished within minutes, and airport spokesperson said. There were some minor flight delays, but the terminal was not evacuated. Crews from the Arlington Fire Department assisted airport firefighters on the call. More from the Associated Press.

Arlington Woman to Appear on Jeopardy Tonight — Local resident Liz Murphy, who advanced past the quarterfinals of the Jeopardy Tournament of Champions last week, will face two other returning Jeopardy winners tonight in the semifinals. The show airs at 7:30 p.m. on WJLA (Channel 7).