Arlington wants to deploys speed cameras and to lower speed limits in residential and business districts below 25 miles per hour.

Those are among a list of state legislative priorities the Arlington County Board unanimously approved on Saturday before the upcoming session of the Virginia General Assembly in Richmond.

Board member Christian Dorsey said at Saturday’s meeting that speed cameras allow for equitable law enforcement while reducing public interaction with the police.

“We want to reduce the amount of times that potential conflicts can turn into something that’s unintended,” Dorsey said.

“Automated ticket enforcement has the potential to improve safety… and further advance equitable outcomes by reducing or eliminating race-based disparities in speed enforcement,” the county said its legislative priority list.

“There’s just so much in this state that we find we have responsibility for things and we don’t have the authority to actually do what we need to do sometimes, so this is just a never-ending stream of things that we’re trying to correct and get control over that we ought to have control over,” Garvey said.

Pat Carroll, Arlington’s liaison to Richmond, told the Board that recent leadership changes within the legislature “noticeably helped the fate of Arlington’s legislative priorities.”

Other approved priorities include:

Arlington’s full list of legislative priorities is below the jump.

END_OF_DOCUMENT_TOKEN_TO_BE_REPLACED 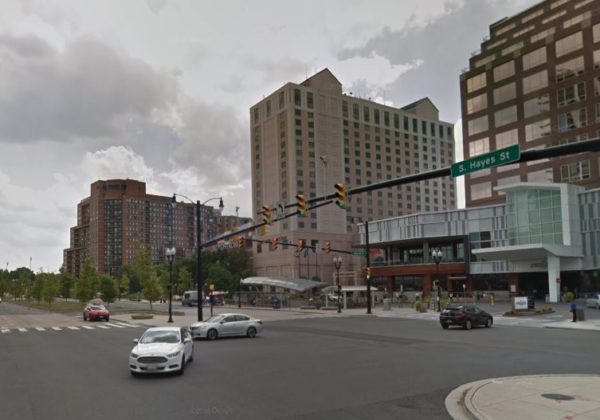 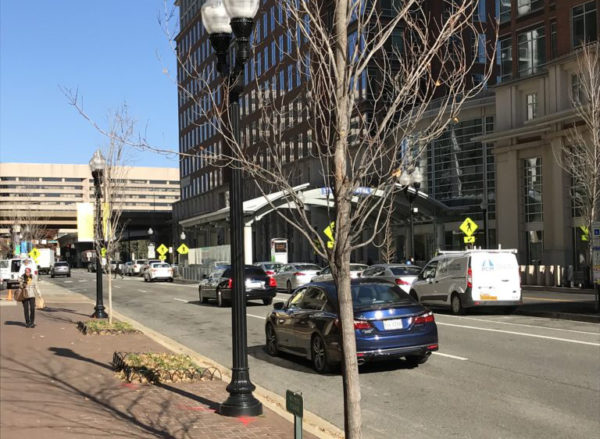 If approved at tomorrow’s (Saturday) County Board meeting, a portion of one of Crystal City’s thoroughfares will receive a substantial upgrade and a speed limit downgrade. 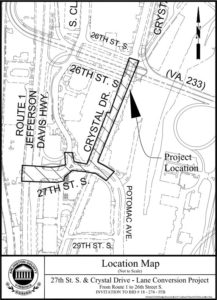 The two-lane expansion in other sections of Crystal Drive occurred in 2013. The two-lane conversion between 26th and 27th Streets S. will be the third and final phase of the street’s conversion to an almost entirely two-way road.

At tomorrow’s meeting, the County Board will vote on a contract for the $1.2 million project.

At the same meeting, the Board will also vote on whether to authorize a public hearing on lowering the speed limit along Crystal Drive from 30 to 25 mph.

The county’s Transportation Master Plan recommends 25 mph as the standard speed limit on arterial streets in Arlington’s downtown districts where there are high volumes of pedestrians and high density land development. A study of the local traffic was conducted at the request of the Crystal City Business Improvement District and determined that Crystal Drive qualified for a speed limit reduction.

If approved, the speed limit reduction will be considered at the Board’s Oct. 20 meeting.

Photo and map via Arlington County 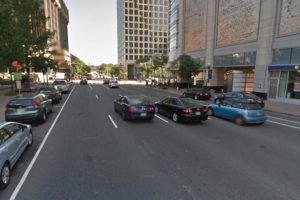 The Arlington County Board is scheduled to consider a change to the speed limit on two Rosslyn arterial streets.

On Saturday, the Board is expected to approve a staff recommendation to lower the speed limit on N. Lynn Street and Fort Myer Drive from 30 to 25 mph. The change encompasses the stretch of each road between Arlington Blvd and Lee Highway.

According to a traffic engineering study, the change is not expected to lower the volume of traffic on the roads. Rather, it is hoped that lower speeds will improve safety, since Lynn and Fort Myer are heavily used by pedestrians.

Presently, the collision rate for both roads is “well below the statewide average rate,” according to the staff report. The average vehicle speed is at or below 25 mph on each.

It is Arlington’s stated transportation policy to lower speed limits on “downtown” arterial streets to 25 mph. The Board lowered the speed limit along Wilson and Clarendon Blvds from 30 to 25 mph in July.

The cost of installing new speed limit signs, should the change be made, is estimated at $2,000.

The Board acted in line with its Master Transportation Plan in lowering the speed limits on the key local arteries.

The speed limit on Wilson Blvd and Clarendon Blvd was lowered from 30 to 25 mph between Rosslyn and Washington Blvd.

Meanwhile, the speed limit on N. Meade Street was lowered from 30 to 25 mph between Arlington Blvd and Marshall Drive., while N. Sycamore Street from Washington Blvd. to 17th Street N. will see its speed limit drop from 35 to 30 mph.

The change in speed limit is effective immediately, and county staff said they expect the signs reflecting the change to be installed Wednesday.

“The county’s actions to lower speed limits on segments of some key roads are in keeping with the Master Transportation plan, and are intended to make these roads safer for everyone — drivers, pedestrians and cyclists,” said Board Chair Walter Tejada.

The Board also put a public hearing on the agenda for its Sept. 21 meeting to hear public feedback for lowering the speed limits on N. Lynn and Fort Myer Drive between the Key Bridge and Arlington Blvd. from 30 to 25 mph.

As part of the same resolution, the Board changed the County Code to reflect Virginia Department of Transportation’s imposed speed limits on I-66 and I-395. The speed limits of the roads were not changed but, for instance, the code will now officially reflect that I-66 is a 45 mph road between the Virginia state line and N. Lynn Street and 55 mph between N. Lynn Street and Fairfax County.

The County Board may decide to decrease speed limits on a number of roads throughout Arlington, including the main thoroughfares from Rosslyn to Clarendon. Board members are scheduled to take up the issue at their meeting on Saturday (July 13).

Arlington’s Master Transportation Plan includes a policy to design streets with lower vehicle speeds without impeding or diverting traffic. Part of that involves adopting a 25 mile per hour speed limit in the county’s “downtown” areas where pedestrian traffic is high, such as along Wilson Blvd and Clarendon Blvd.

County staff members recommend Board approval for the speed limit discrepancy corrections and for decreasing the speeds along the four stretches of county roads.

The cost of installing new speed limit signs to reflect the changes is estimated to be $5,000. Funds are available in the Fiscal Year 2014 Department of Environmental Services Transportation Engineering and Operations operating budget.

Next month, the Arlington County Board is expected to consider a proposal to lower the speed limit on Wilson and Clarendon Boulevards between Rosslyn to Clarendon.

As reported by the Sun Gazette, the proposal would lower the speed limit on the key arteries, between Washington Blvd and Route 110, from 30 to 25 miles per hour.

The lower speed limit is in keeping with the county’s Master Transportation Plan, which calls for a 25 mile per hour speed limit on streets with lots of development and pedestrian activity.

What do you think of the proposal? 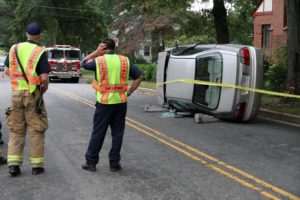 Two D.C. councilmembers are proposing that the speed limit on residential streets in the District be lowered from 25 miles per hour to 15 miles per hour.

The plan would make the streets safer for pedestrians and cyclists, while adding only a minute or two of travel time to most trips, advocates say.

Critics say such low speeds would be hard for motorists to maintain, would add to the District’s traffic woes and could actually increase incidents of aggressive driving and road rage.

Arlington has been especially conscientious when it comes to ‘traffic calming’ projects in residential neighborhoods. Should the county ask Virginia (a Dillon Rule state) to allow localities to post lower residential speed limits?

Police in Fairfax County tell the Washington Post that a man was murdered over the weekend because of his advocacy of speed humps. Police say that Stephen Carr and David Patton had argued before about Carr’s campaign to build a speed hump on the street in front of his Burke home. Then, on Sunday, investigators say an enraged Patton tied up Carr and Carr’s girlfriend, then shot him in the head.

Of course, such extreme acts of violence over neighborhood disagreements are rare. But in speed hump-filled Arlington, it’s easy to be left with the unsettling feeling that such an act of madness is not completely outside the realm of possibility.

Over the past few years, a civil war of sorts has been waged over the mounds of asphalt that force drivers to slow down lest they damage their vehicles. A 2006 article described one such situation in North Arlington as a “pitched battle” and “class warfare at its worst.” A 2008 article, also about Arlington, called speed humps “the ultimate suburban battleground,” pitting “neighbor against neighbor and, more often, resident against motorist.”

So we ask: What’s the angriest you or someone you know has gotten over speed humps? (Or other “traffic calming” measures.) 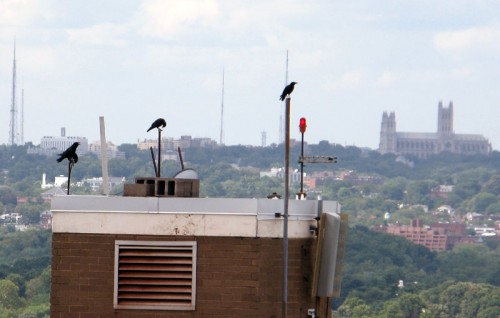 More Proof of Arlington’s Burger Supremacy — The Associated Press has declared that “better burger” joints — think: Five Guys — are “one of the fastest-growing parts of the restaurant industry” and that the D.C. area in particular “has emerged as fertile ground for ground chuck.” Mentioned in the article are Arlington-based Elevation Burger and Ray’s Hell Burger, formerly Arlington-based Five Guys, and BGR-The Burger Joint, which recently opened a location in Lyon Village.

Pentagon Chocolatier Popular With Pelosi, Palin — What do Nancy Pelosi and Sarah Palin have in common? They’re both loyal customers of Sherm Edwards Candies, a Pittsburgh-based chocolate company that recently opened a store in the Pentagon. More from the Pittsburgh Tribune-Review.

Lower Speed Limit for Pershing Drive? — At Saturday’s county board meeting, a representative of the Lyon Park Civic Association made an impassioned plea for speed control measures on Pershing Drive. In response, the board pledged to review speed limits and other traffic concerns. More from the Sun Gazette.