Interest Rates Could Slow Development — “Arlington County leaders are preparing for a difficult economic environment for multifamily development, even as they say they’re optimistic about the region’s future… [I]f the Federal Reserve pushes the federal funds rate to 3.5% by year-end as it has targeted, that could have serious repercussions, said Shooshan Co. Chairman John Shooshan, speaking at Bisnow’s Future of Arlington County event on Thursday.” [Bisnow]

Talent Driving Local Tech Strength — “Northern Virginia has become a magnet for the industry, with the Dulles Technology Corridor continuing its growth along the Silver Line and Amazon HQ2 going up in Arlington… Taylor said the upcoming Virginia Tech Innovation Campus in Alexandria and George Mason’s Fuse at Mason Square in Arlington are two projects that will be pivotal to ‘churning out more talent.'” [Axios]

Business Is Booming at Airport — “Concession sales are booming at Reagan National and Dulles International airports as travel continues to rebound from the early days of the Covid pandemic. Since the start of 2022, concessions sales have grown 241% at National and 143% at Dulles.” [Washington Business Journal]

‘CraigPokesU’ Manager Profiled — “Blake Williams has 14 dragon tattoos and 12 piercings. Some of his body art you can see — like the ‘third eye’ on his forehead, the ring in his nose and the letters that spell out ‘kindness’ on his knuckles — while others fall into the ‘that’s private’ category, he says. Williams, 47, is the head piercer and shop manager at CraigPokesU on Langston Boulevard, just up the street from Cowboy Cafe.” [Arlington Magazine]

Arlingtonian Helped to Shape Region — “Chuck Bean has spent 10 years leading the Metropolitan Washington Council of Governments… Bean, who lives in Arlington, is unknown to many D.C.-area residents, but as liaison between COG’s 125 staffers and public officials representing 24 counties and cities, he has played a lead role in coordinating regional planning to improve transportation, combat climate change and encourage more housing construction.” [Washington Post]

Thousands of tattoo enthusiasts are expected to flock to Arlington this weekend for the DC Tattoo Expo.

This is the eleventh iteration of the region’s largest body and tattoo expo, which was canceled last year amid the pandemic. It was previously held in Crystal City, but is now moving to the Sheraton Pentagon City (900 S. Orme Street) — which is actually more a mile from Pentagon City, along Columbia Pike.

There will be plenty of tattoo artists, contests, live entertainment, and even a few “Ink Masters,” participants from the long-running reality show.

Organizers are optimistic that up to 15,000 are expected to attend the weekend-long expo, which begins this Friday at 1 p.m. and ends Sunday evening. Masks are encouraged, but not required.

Spokesperson Anna Carswell tells ARLnow that the expo is a safe space where veterans and beginners alike can see and learn about the process of getting a tattoo.

“It’s a place to come and be voyeuristic almost,” Carswell says. “[Tattoos] are not as taboo as they were, but can still be slightly intimidating. Here you can learn what goes into it, the design, and process.”

She says many people come to the expo to get their first tattoo.

There will also be some pretty eclectic live performances throughout the weekend. This includes Captain and Maybelle, world-renowned sword swallowers, burlesque dancer Cervena Fox, and the Miss DC Pin Up Contest on Saturday night.

Carswell says tattoos have become mainstream and popular in recent years, particularly in the D.C. area, but there is still some hesitation among the uninitiated. She says the expo allows people who might be “curious” to learn about and get exposed to tattoo culture. 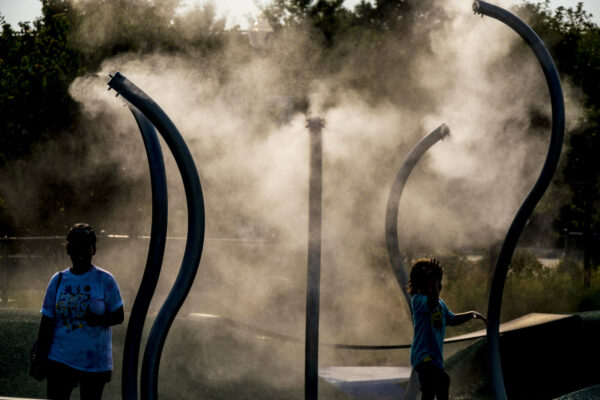 Preservation Battle Brewing — “The historic-preservation advocate who launched a community-driven, albeit ultimately unsuccessful, effort to save the Rouse estate on Wilson Boulevard, is on a new quest. Tom Dickinson has filed paperwork with county officials seeking historic-district status for an East Falls Church home, despite the likelihood that the current property owner aims to raze the home and redevelop the 0.29-acre parcel.” [Sun Gazette]

Arlington Ranks No. 39 Healthiest in U.S. — Updated at 9:20 a.m. — “U.S. News and World Report, in its annual assessment of the ‘healthiest communities in the U.S.,’ has given a staggering third place finish to the City of Falls Church in its latest edition. That’s ahead of all other entities in the entire nation, except for Los Alamos, New Mexico, and Douglas County, Colorado. The magazine listed the top 500 entities in the U.S., and others in this area to finish near the top were Loudoun County at No. 4, Fairfax County at No. 14 and Arlington County at No. 39, the City of Alexandria at No. 124 and Fauquier County at No. 195.” [Falls Church News-Press]