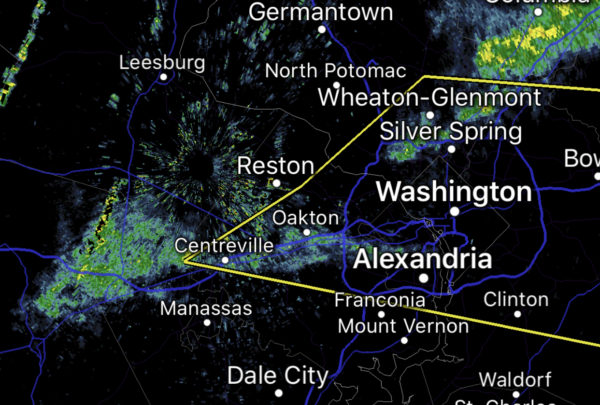 Arlington County is under a Severe Thunderstorm Warning until 12:30 a.m.

Forecasters are warning of high winds with an approaching line of storms.

* AT 1147 PM EST, SEVERE THUNDERSTORMS WERE LOCATED ALONG A LINE EXTENDING FROM FAIRLAND TO BETHESDA TO NEAR CENTREVILLE, MOVING EAST AT 55 MPH.

IMPACT…DAMAGING WINDS WILL CAUSE SOME TREES AND LARGE BRANCHES  TO FALL. THIS COULD INJURE THOSE OUTDOORS, AS WELL AS  DAMAGE HOMES AND VEHICLES. ROADWAYS MAY BECOME BLOCKED BY  DOWNED TREES. LOCALIZED POWER OUTAGES ARE POSSIBLE. UNSECURED LIGHT OBJECTS MAY BECOME PROJECTILES.

WIND DAMAGE WITH THESE STORMS WILL OCCUR BEFORE ANY LIGHTNING. DO  NOT WAIT FOR THE SOUND OF THUNDER BEFORE TAKING COVER. SEEK SHELTER IMMEDIATELY INSIDE A STURDY STRUCTURE AND STAY AWAY FROM WINDOWS. 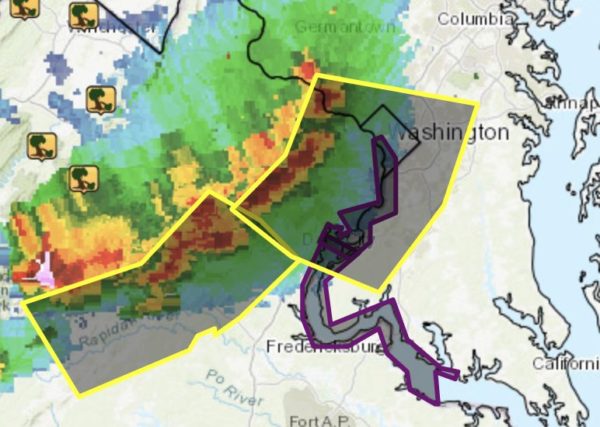 Arlington County is now under a Severe Thunderstorm Warning through 5:45 p.m.

A line of severe storms is approaching the Beltway from the northwest, packing potentially damaging winds and hail.

* AT 457 PM EDT, SEVERE THUNDERSTORMS WERE LOCATED ALONG A LINE EXTENDING FROM NEAR GREAT FALLS TO FAIRFAX TO NEAR BULL RUN, MOVING EAST AT 25 MPH.

IMPACT…DAMAGING WINDS WILL CAUSE SOME TREES AND LARGE BRANCHES TO FALL. THIS COULD INJURE THOSE OUTDOORS, AS WELL AS DAMAGE HOMES AND VEHICLES. ROADWAYS MAY BECOME BLOCKED BY DOWNED TREES. LOCALIZED POWER OUTAGES ARE POSSIBLE. UNSECURED LIGHT OBJECTS MAY BECOME PROJECTILES. 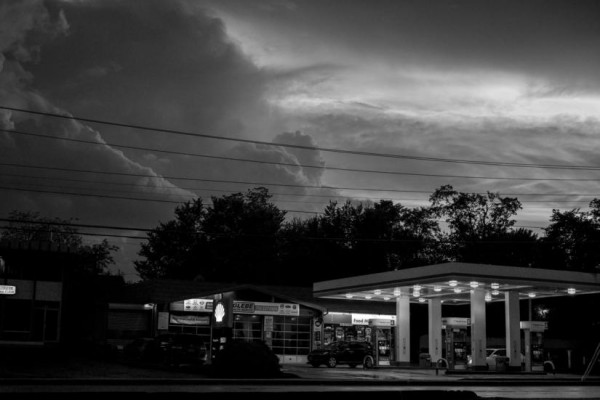 Update at 4:40 p.m. — A portion of northern and eastern Arlington County is now under a Severe Thunderstorm Warning until 5:15 p.m.

Earlier: Arlington, D.C. and much of the region are under a Severe Thunderstorm Watch this evening.

Forecasters say strong storms packing damaging wind gusts and hail are possible. The storms may also cause areas of flooding.

A SEVERE THUNDERSTORM WATCH IS IN EFFECT FOR THE OUTLOOK AREA UNTIL 9 PM THIS EVENING. THUNDERSTORMS MAY PRODUCE LOCALIZED DAMAGING WIND GUSTS AND ISOLATED INSTANCES OF FLOODING THIS AFTERNOON AND EVENING.

A Severe Thunderstorm Watch (in pink) is in effect until 9 PM for most of our forecast area for the potential for damaging thunderstorm. Primary threats will be damaging winds and large hail. pic.twitter.com/PoSu9vIjcT

Weather radar shows a line of storms to the west, currently near the Virginia/West Virginia border. 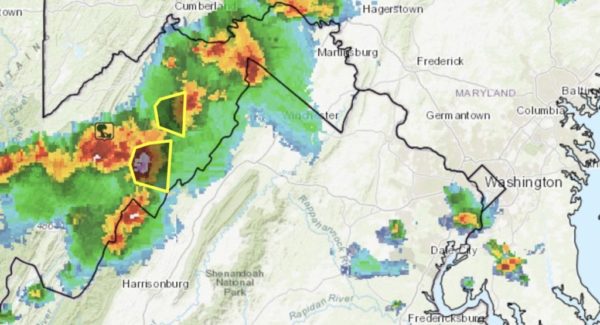 Those driving tonight are being encouraged by VDOT to “stay weather aware.” 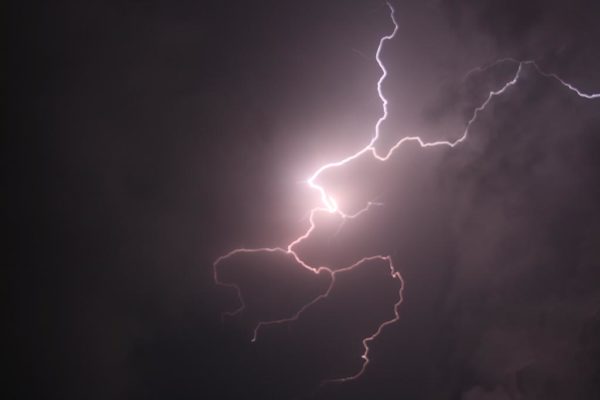 A portion of northwestern Arlington is under a Severe Thunderstorm Warning as a line of strong storms packing frequent lightning roll in from the west.

North Arlington is getting quite the light show from this storm pic.twitter.com/Yoh3y0yWoK 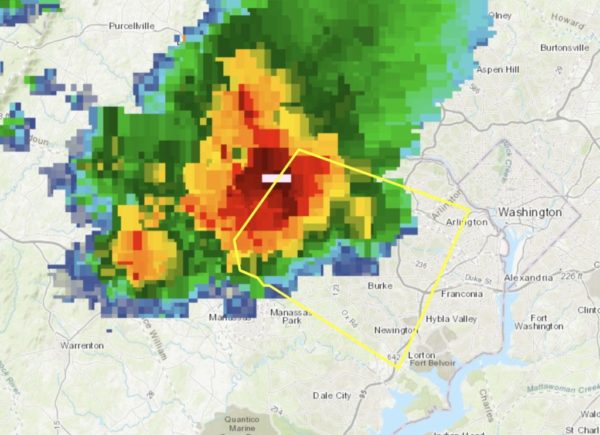 A Severe Thunderstorm Warning has been issued for a portion of Arlington County as a storm with a history of damaging winds approaches from the northwest.

The warning is in effect until 4 p.m.

* AT 316 PM EDT, A SEVERE THUNDERSTORM WAS LOCATED OVER CHANTILLY, OR NEAR CENTREVILLE, MOVING SOUTHEAST AT 15 MPH.

IMPACT…DAMAGING WINDS WILL CAUSE SOME TREES AND LARGE BRANCHES TO FALL. THIS COULD INJURE THOSE OUTDOORS, AS WELL AS DAMAGE HOMES AND VEHICLES. ROADWAYS MAY BECOME BLOCKED BY DOWNED TREES. LOCALIZED POWER OUTAGES ARE POSSIBLE. UNSECURED LIGHT OBJECTS MAY BECOME PROJECTILES.

CONTINUOUS CLOUD TO GROUND LIGHTNING IS OCCURRING WITH THIS STORM. MOVE INDOORS IMMEDIATELY. LIGHTNING IS ONE OF NATURE’S LEADING KILLERS. REMEMBER, IF YOU CAN HEAR THUNDER, YOU ARE CLOSE ENOUGH TO BE STRUCK BY LIGHTNING.

TORRENTIAL RAINFALL IS OCCURRING WITH THIS STORM, AND MAY LEAD TO FLASH FLOODING. DO NOT DRIVE YOUR VEHICLE THROUGH FLOODED ROADWAYS. 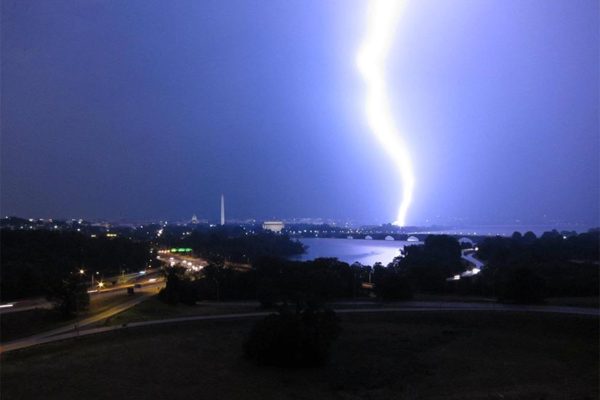 For the third night in a row, parts of Arlington County are under a Severe Thunderstorm Warning.

A line of storms approaching from the southwest has reached Arlington with potentially damaging winds and heavy rain. The rain may cause localized flooding, as Arlington remains under a Flash Flood Watch.

Update at 2:30 p.m. — The National Weather Service just issued a Severe Thunderstorm Watch for Arlington and the region.

Update at 11:15 p.m. — A Flash Flood Watch has been issued for Arlington and is set to take effect Monday afternoon.

Forecasters say multiple rounds of storms are expected later in the day Monday, producing heavy rainfall that could produce flooding.

* MULTIPLE ROUNDS OF SHOWERS AND THUNDERSTORMS CAPABLE OF PRODUCING HEAVY RAINFALL ARE LIKELY. AREAL AVERAGE RAINFALL OF 1 TO 1.5 INCHES IS EXPECTED, WITH ISOLATED TOTALS OF 4 INCHES POSSIBLE. MUCH OF THIS RAIN MAY FALL IN SHORT PERIODS OF TIME IN ANY ONE GIVEN LOCATION, RESULTING IN THE RISK FOR FLASH FLOODING MONDAY AFTERNOON INTO MONDAY NIGHT.

While the heat lessens slightly Monday, the threat for heavy thunderstorms will increase. A Flash Flood Watch will be in effect from Monday afternoon through late Monday night. pic.twitter.com/YhY9COkdHy

END_OF_DOCUMENT_TOKEN_TO_BE_REPLACED 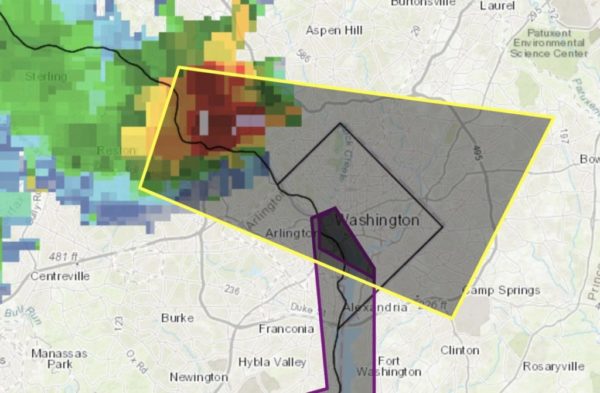 Earlier: Portions of Arlington County are under a Severe Thunderstorm Warning until 10 p.m.

Forecasters say the storm is packing winds of 60 miles per hour or stronger, as well as possible quarter-sized hail.

Severe tstorm warning issued for DC, Southern MoCo as small but potent storm heads toward the city. Thousands gathered at the Mall for #Apollo50 should have a shelter plan in mind next 30 min. pic.twitter.com/jjiJ8mnphj 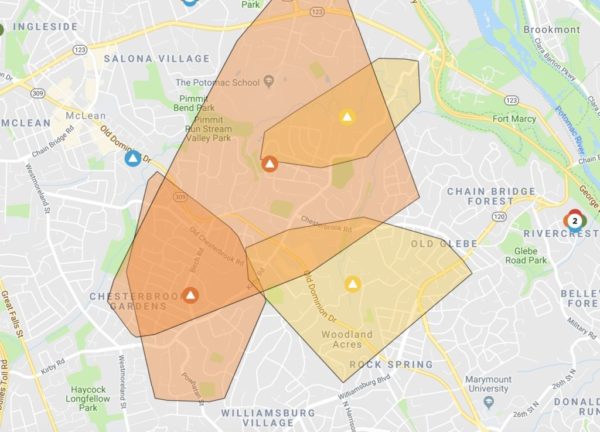 Update at 10:40 p.m. — There are still 664 Dominion customers without power across various parts of Arlington, according to the power company.

Update at 5:30 p.m. — A Severe Thunderstorm Watch has been issued for Arlington. More from the National Weather Service:

Earlier: Arlington County and much of the surrounding region is now under a Severe Thunderstorm Watch.

A line of strong storms is approaching from the west, packing high winds and potentially penny-sized hail.

The storms are expected to pass through Arlington within an hour or so.

Severe Thunderstorm Watch issued for the I-95 corridor, central and northeast Maryland until midnight. Damaging wind gusts in excess of 60 mph and dangerous cloud to ground lightning are the main threats. #DCwx #MDwx #VAwx pic.twitter.com/lcFyrx66BR

Update at 5:25 p.m. — It’s “too early to tell” whether a disaster declaration will be made due to the extensive damage from today’s flooding, an Arlington County spokeswoman tells ARLnow.com.

Per Arlington’s Office of Emergency Management:

Arlington County continues to work with state and local partners to assess the damage from today’s storms. Detailed damage assessments, especially for roadways and bridges, will take additional time as crews continue to assess impacts. Arlington PSCEM is in contact with VDEM and FEMA Region III and working to assess what assistance, if any, is available to our residents from state and federal programs.

Update at 3:30 p.m. — A number of businesses in Westover Village are closed following this morning’s flooding.

Updated at 3:15 p.m. — Video posted to social media shows major flooding this morning in the area of 33rd and 34th streets at N. Kensington Street, several blocks from Yorktown High School. At least one home was reported to have been evacuated while several homes were damaged by floodwaters that reached mid-way up a front door.

Another video posted to Twitter shows flooding in the Waycroft-Woodlawn neighborhood.

Our front yard during the flash flooding this morning in the Waycroft Woodlawn neighborhood of Arlington, VA. @capitalweather pic.twitter.com/oOZVlKqevn

Update at 3 p.m. — Flooding has prompted the Unitarian Universalist Church of Arlington to cancel all events and activities, the church said via Twitter.

The GW Parkway has reopened near the airport after it was closed due to flooding.

The Cherrydale Branch Library is closing early due to “power issues.” Dominion is currently reporting 434 customers without power in Arlington, mostly in and around Rosslyn.

Update at 2:15 p.m. — Arlington’s Solid Waste Bureau says it will help residents track down waste carts the floated away during this morning’s rain and flooding.

As a result of today's flooding, the Solid Waste Bureau will be tracking down missing carts to return them to their proper residences. Please refrain from submitting lost cart requests before noon Wednesday, July 10. https://t.co/WWY66ITtC1

Update at 1:05 p.m. — Video (below) shows flooding in the Westover Market and its attached, outdoor beer garden.

Update at 1 p.m. — “As flood conditions continue, please be safe and avoid standing and moving water,” writes Arlington County Board member Katie Cristol. “As the weather moves on, you can find more resources about cleanup, protection and water damage at https://emergency.arlingtonva.us“

Meanwhile, WAMU is reporting extensive flooding in Arlington’s Waverly Hills neighborhood. And a Flood Warning has been issued for Arlington until 6 p.m., replacing the earlier Flash Flood Warning.

* At 1252 PM EDT, reporting gauges indicate larger streams are still rising from the earlier torrential rain, and many road closures
are still being reported. Although the threat of rapid rise life threatening flooding is diminishing, some flooding is likely to continue for the rest of the afternoon. Therefore, this Flood

A Flood Warning means that flooding is imminent or occurring. All interested parties should take necessary precautions immediately.

Video sent to ARLnow shows a parking lot at Marine Corps base Henderson Hall completely flooded. Also, videos posted to social media (below) shows raging waters along Four Mile Run creek near the Shirlington dog park and along N. Kirkwood Road at the height of the storm.

And this is why it took me almost 3 hours to get to work on Rt. 110. Stay safe drivers. Watch @ABC7News for what you need to know for the rest of the day. pic.twitter.com/XnWXXkLtTS

Update at 12:15 p.m. — “Crews continue to inspect storm drains for blockages but many lines remain over capacity because of stream water levels,” says Arlington’s Dept. of Environmental Services.

Update at 12:10 p.m. — Flooding along Lubber Run may have washed out a pedestrian bridge, per a social media post.

Also per social media, debris and floodwaters have blocked the Four Mile Run trail near Shirlington.

Update at 12 p.m. — In addition to flooded basements, high standing water has been reported in a number of parking garages — including the Ballston Quarter parking garage and a garage used by Arlington County Police.

NUMEROUS VEHICLES SUBMERGED ON CANAL ROAD NW NEAR FLETCHERS COVE BOATHOUSE. DRIVERS STRANDED ON VEHICLE ROOF TOPS, SOME SWAM TO SAFETY, AND OTHERS WERE ESCORTED TO SAFETY BY DC FIRE AND EMS.

More rain looks to be on the way, but we should start drying out later this afternoon.

The leak appears to be spreading in the few minutes I was watching. pic.twitter.com/0haFk7P1Ov

Arlington’s Emergency Communications Center says it has received 600 calls since 8:40 a.m., including 25 water rescues in Arlington and 27 flooded buildings.

A Flash Flood Warning remains in effect for Arlington through 1:45 p.m.

ACPD Officers are hard at work addressing traffic complaints related to today’s storm. Remember: it is never safe to drive or walk into flood waters. pic.twitter.com/BUhhykt4CL

END_OF_DOCUMENT_TOKEN_TO_BE_REPLACED

Update at 9:40 p.m. — The Arlington County Fire Department responded to at least two reports of house fires caused by lightning strikes. The number of outages in Arlington reported by Dominion is now 966.

#FinalUpdate: 3600 N Nelson St, Fire is out. Most units going in service. No injuries. Fire Marshal on scene to investigate. pic.twitter.com/enCm2dFOq5

Update at 7:55 p.m. — Dominion is reporting 934 customers without power in Arlington County in the wake of the storms, which packed high winds and torrential rain. Portions of residential North Arlington appear to be the hardest hit.

Earlier: Arlington is now under a Severe Thunderstorm Warning, as strong storms bear down on the county from the northwest.