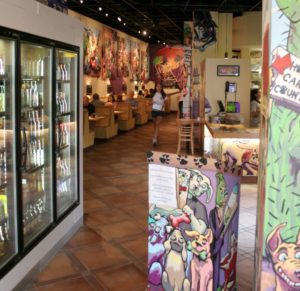 For Mike Barnes, Jim’s brother, the formula boils down to this: quality food at reasonable prices. That kind of universal appeal is why he believes Lost Dog will have no problem expanding outside the safe confines of Arlington. It’s also why he and his partners are setting their sights even further.

After the McLean location opens up, the group will start planning for their next expansion.  So far the likely candidates include Alexandria and Capitol Hill.

The friends may be moving quickly, but their planning is methodical. With take-out and delivery accounting for 50 percent of Lost Dog’s business, the McLean location was chosen specifically to provide a contiguous zone of delivery service. It also helps that nearby Tysons Corner has a huge population of office workers who need to eat something for lunch.

“A family-friendly restaurant with good food,” said Barnes, “[is] a recipe that will work anywhere.”

For additional information: Check out Lost Dog Café’s absurdly long menu, including 90 different varieties of pizzas, sandwiches, and pastas. Also, take a look at the equally-impressive beer list. Or watch the Arlington Virginia Network’s recent “Food for Thought” feature on the restaurant.