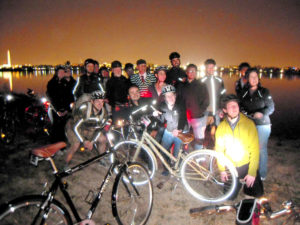 It was a bit of a surreal experience. Nearly 30 cyclists, bike lights leading the way, heading down the darkened Mt. Vernon Trail. One rider in the convoy is on her Gary Fisher bike. Another rider is Gary Fisher.

Fisher arrived at Revolution Cycles City Hub in Crystal City shortly after 7:00 Tuesday night. Dressed in a horizontal stripe  suit, high argyle socks and a cap befitting someone on a fox hunt, Mr. Fisher cordially greeted the Revolution employees, Crystal City BID honchos and cycling enthusiasts who gathered outside the store. He signed bikes and bike parts, and posed for more photos than should have reasonably been asked of him.

The ride only went as far as the Humpback Bridge before turning off for an impromptu, bike light-fueled “campfire” near the Potomac. Then, despite the unusually pleasant weather, it was back to Crystal City.

It was neither an endurance challenge nor a race, but the ride was exhilarating for the sheer novelty of riding a mountain bike next to the guy who literally invented mountain bikes. 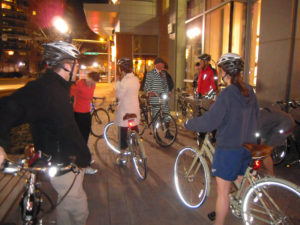 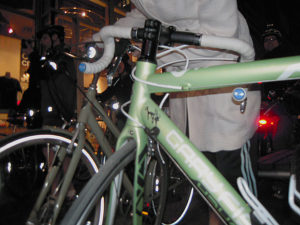 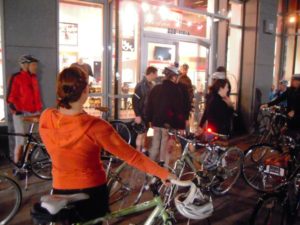