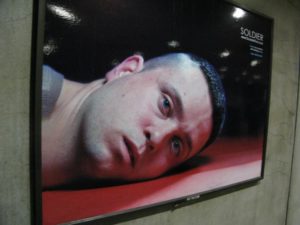 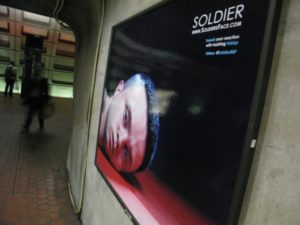 A provocative series of photographs are on display at six Washington-area Metro stations, including Rosslyn and Pentagon City.

The photographs, displayed in frames usually reserved for advertisements, show the faces of nine American soldiers photographed between tours of duty in Iraq and Afghanistan.

The Soldier Billboard Project, as the series is called, is a collaboration between New York photographer Suzanne Opton and curator Susan Reynolds. The billboards ask viewers to Tweet their reactions.

The photograph at the Rosslyn Metro, above, went on display Thursday. It will remain there until April 4th.