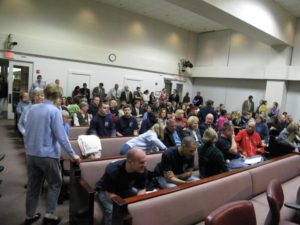 About 150 people packed the Arlington County board room in Courthouse Tuesday night to voice concerns about the county’s proposed budget cuts.

Nearly 80 speakers came to the podium during the three hour public hearing. County residents and employees spoke out against proposed cuts to public safety agencies, substance abuse programs, senior centers, and libraries, as well as environmental, educational and recreational programs and facilities.

Resident Andrea Walker started the night off on a humorous note, saying board members should consider “self-preservation” before cutting funding to the Aurora Hills Senior Center, which regularly serves about 100 “cranky seniors.” 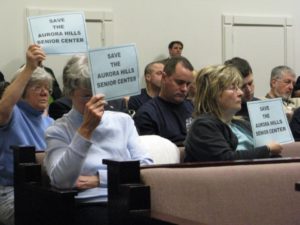 Walker was among eight people who spoke out against the plan to cut funding for Aurora Hills’ part-time senior coordinator. The senior programs “are keeping me alive,” said Frank Minichello, 92. Several others spoke in favor of restoring funding to the Lee and Madison senior centers.

Four police officers – including the presidents of the Arlington Police Beneficiary Association and the Arlington Coalition of Police union – received loud applause for their arguments against cutting police funding. More on that here.

Four people, backed by a larger contingent of supporters armed with signs, fliers and buttons, pleaded for the county to increase funding to Arlington’s Doorways for Women and Families crisis shelter, which has seen a significant reduction in private donations.

A number of residents, speaking on behalf of the Arlington Street People’s Assistance Network (A-SPAN), asked the board to fund a year-round homeless shelter. Among the speakers was Rev. Richard Cobb, of the Central United Methodist Church, who said homelessness will become an even greater problem in the community after the emergency winter shelter closes on April 1.

Half a dozen people, some speaking with the help of an interpreter, asked the county to continue funding Project Family, which provides free early childhood education and parenting programs in English and in Spanish. 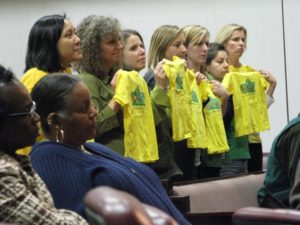 A group of mothers spoke and held up kid-sized t-shirts in support of pre-school and early childhood programs at the Madison Community Center. Shireen Dodini, who participates in a play group at the center, said she knows of seventy families that would be affected if funding is cut.

Three people spoke out against cuts to Gulf Branch Nature Center, which some fear could ultimately lead to its closure. Robert Atkins said cuts to the nature center are untenable, even to a self-described “taxpayer and fiscal conservative.”

Michael Nardolilli, president of the Northern Virginia Conservation Trust, lamented the “Draconian chop” to funding for natural resources, while a half dozen people in green shirts held homemade signs. 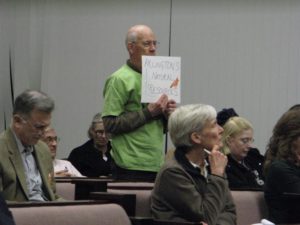 Tricia Freeman, of the Arlington Forest Community Association, asked the county to restore funds to the outdoor amphitheatre at Lubber Run Park. Another speaker, Janet Irwin, said the 1,200 seat facility is being severely neglected.

“It would be a travesty to allow the Lubber Run amphitheatre to deteriorate to a point where it would need to be rebuilt,” Irwin said.

HB Woodlawn senior Benjamin Hubbert presented the board with a student petition against cutting Sunday hours at libraries, saying Sunday is one of the only free days available for busy students. Hubbert also spoke out against cutting periodicals from the libraries.

Other presenters spoke on behalf of Bike Arlington, Encore Stage and Studio, Northern Virginia Community College, and the Clarendon House rehabilitation program, among others.

Sixty-five speakers are already registered for a second budget hearing, scheduled for 7:00 tonight (Wednesday). A public hearing on the proposed tax rate increase will be held Thursday night. 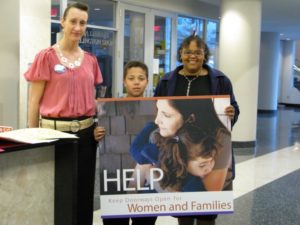 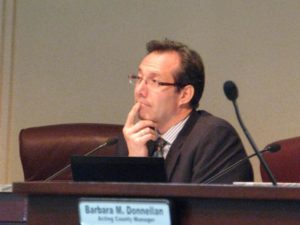