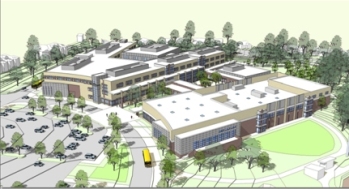 The Arlington County Board has given the go-ahead to include the proposed new Wakefield High School as part of its bond referendum this fall.

The $104.6 million project was fast-tracked by the school system and the county board in order to take advantage of more favorable bids from construction companies hurt by the recession. Originally, the county’s 2008 Capital Improvement Plan called for the school’s bond referendum to take place in 2012.

“By moving the project forward we will realize significant savings through reduced construction costs,” board Chairman Jay Fisette said in a statement.

“The new Wakefield High School will be a great civic building that will be both a first-class educational facility and an asset to the broader community,” said board vice-chairman Christopher Zimmerman.

In April, Acting County Manager Barbara Donnellan raised questions about whether the school’s financing could cause issues with the county’s debt limits and put Arlington’s excellent AAA bond rating in jeopardy. Apparently those fears were allayed.

Residents will vote in November on whether to approve the bonds necessary to build the school.