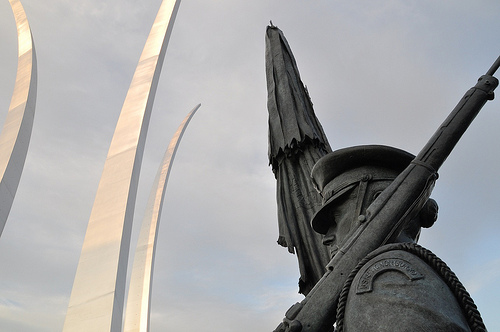 Bike Sharing System Named, Minor Controversy Ensues — It’s like the 2000 election all over again. After asking the public to vote on a new name for the recently-announced Arlington-D.C. bike sharing system, Arlington County and DDOT decided to ignore the name that got the most first place votes — “George” — and go with the name that got the most first, second and third place votes — “Capital Bikeshare.” Some blog commenters have been bemoaning the choice of a generic, non-interesting name, but hey, at least officials took the time to explain why Capital Bikeshare is a better name than George, right?

Combat-Ready Tech Coming Back to Marine Corps Marathon — FLIR Systems, the company that develops the infrared cameras you’ve probably seen if you’ve ever watched one of those car chase shows, is going to showcase some of its military tech at the Marine Corps Marathon in October. The technology, which is also helping to keep Marines safe in war zones, will be placed throughout the course. It will allow authorities to track any “situation” during the long race. It will also provide a live video feed of the race leaders.