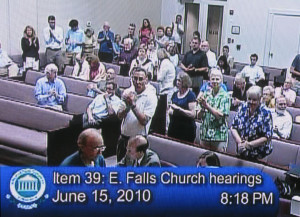 The battle over the future of East Falls Church was well underway before the Arlington County Board spent more than two hours on the topic Tuesday night, but the raw emotion behind the neighbor vs. neighbor conflict became especially clear as about 20 speakers took the podium to voice their opinions.

The East Falls Church (EFC) development plan calls for the creation of a “transit town” of neighborhood-oriented retail and restaurants, six to nine-story mixed-use buildings, and pedestrian-oriented walkable and bike-able streetscapes. Development is inevitable, EFC task force chairman Mike Nardolilli says, since the station will soon become the transfer point to Tysons Corner and the Silver Line. Members of the task force spent three years working on the plan and says it mostly incorporates ideas that most residents welcome, based on a neighborhood survey.

But according to one man, supporters of the plan are “passive sheep,” the task force wants “to limit our freedom,” and the proposed narrowing of Sycamore Street is “idiotic.” That invective, and any other criticism of the plan, was greeted by loud applause from like-minded folks in the audience, who were clearly in the majority.

Critics said they weren’t adequately informed about the planning, complained that development would destroy the character of their largely low-density residential neighborhood, and worried that it would bring maladies like traffic, crime and pollution.

Development is “unneeded and unnecessary,” and the planning that has gone into it is a “sham process” one person said. “We do not want to turn our residential neighborhood into another Ballston,” said another. Several people called for an environmental impact study.

On the other side, one man was so overcome by frustration with the plan’s critics that he was, at one point, literally rendered speechless at the podium. He blasted fellow residents who believe that “everything should stop” when they move to a neighborhood.

He said that when he first moved to Arlington 58 years ago, before Metro and before I-66, East Falls Church had the kind of retail core that the development plan is trying to facilitate. Compared to the building of I-66, he said, “this is a minor change.”

“Over the years I’ve seen Arlington go through many changes and every change is controversial,” the man said. “There is always somebody who’s going to object… This is a good plan, not perfect, but it’s still a good plan.”

Other “smart growth” advocates lauded the plan, while another contingent at the meeting said the plan didn’t go far enough.

Michelle Winters, acting chair of the Arlington Housing Commission, said the plan does not have the density needed to support affordable housing and other the desired retail amenities appropriate for what will soon become the Metro transfer point to Tysons Corner on the Silver Line. She and other development advocates would like to see something more akin to the higher-density Virginia Tech East Falls Church Metro Plan, which was released in 2004.

Despite all the controversy and the raised emotions, the plan — even if approved by the board — is only a “framework,” which would guide development. The board would still have to approve individual developments through its usual process.

“This in no way is going to preclude the very rigorous debate the community will have,” board member Barbara Favola said. “The board will ultimately be able to decide on specific projects that fit within this framework. That’s a very key point.”

And in fact, the real battle may be yet to come. VDOT owns two-thirds of the five acre commuter parking lot that’s at the heart of the development plan. The proposal calls for most of the lot’s several hundred spaces to be eliminated to make way for 450,000 to 600,000 square feet of mixed-use development.

However, VDOT, which is expected to reveal its thoughts on the plan in August, views the lot as “a regional asset for mobility, not just for Arlington but for residents that live along the I-66 corridor,” according to county officials. About 80 percent of the parking is used by people from outside Arlington.

Another stumbling block is a 70-foot VDOT right-of-way that would be built upon if all goes according to plan. But that seems extremely unlikely, given that VDOT will want to use the space for the widening of I-66, a key state transportation initiative.

Board members Mary Hynes and Walter Tejada tried to diffuse some of the anti-development emotion by emphasizing that the board is not trying to turn East Falls Church into another high-density corridor.

“It’s a main street we’re trying to create, not a downtown,” Hynes said.

See other takes on the meeting from the Falls Church News-Press and the Sun Gazette.