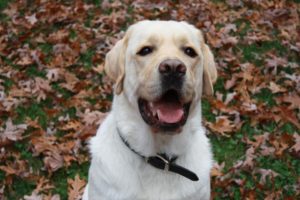 McGruff isn’t the only dog making news today for his looks. Bentley the English lab has bested the competition in Group C and will advance to the final round of our Arlington’s Cutest Dog contest.

Bentley amassed a whopping 560 votes out of the 2,967 that were cast. The closest competitor was Cooper, the teddy bear-like toy poodle who has “a strange obsession with popcorn.” Cooper received 456 votes.

Hats off to Cooper and the other 10 strong competitors in this group. And a special shout-out to Waffles the Dachshund, who gets the honorary (and arbitrary) award for cutest name and most patriotic photo.

Some background on Bentley: he was born on St. Patrick’s Day four years ago (a bit ironic for an English lab) at a farm in Winchester, Va, but moved to Arlington shortly thereafter. He’s a big fan of the Clarendon dog park, he eats only the finest organic dog food, and he is an accomplished swimmer. Bentley considers himself a lucky dog, his owners say.

See results from Group C here. And be sure to cast your vote(s) for our final group of 12, Group D, by 2:00 tomorrow afternoon.

Voting in the final round of the contest will start Monday.

END_OF_DOCUMENT_TOKEN_TO_BE_REPLACED

More Stories
Cava Meets ClarendonRosslyn Says to Trash: Get In My Belly