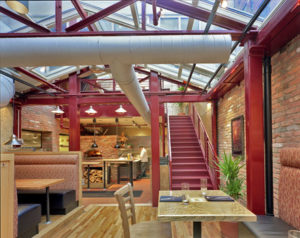 Matchbox, the popular Chinatown/Capitol Hill eatery, is in the midst of an expansion that may eventually include Clarendon.

The restaurant will be expanding with a huge, 10,000 square foot location in Rockville this fall, and another location in Merrifield that will deliver in 2012. But Clarendon is also a big target for co-owner Drew Kim.

“Clarendon is a hotspot for us,” Kim said. “We’re actively searching in Clarendon, we just don’t have a lease signed. There are a couple spots we’re looking at.”

Among the spots Kim is keeping an eye on is the vacant lot down the road from the Clarendon Whole Foods, which is rumored to finally be on the verge of development. Kim was also interested in a big retail space at 2350 Clarendon Boulevard, before it was snapped up by Fire Works Pizza.

Kim says he is primarily focused on the Courthouse/Clarendon area because of its central location and its ability to attract large lunchtime and dinnertime crowds.

Matchbox recently launched (or in the process of launching) two new restaurant concepts that could — if successful — be exported to Northern Virginia. Those restaurants are DC-3, a delicatessen with a focus on gourmet hot dogs, and Ted’s Bulletin, a Prohibition-era diner.