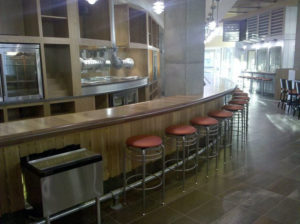 Update on 8/16 — The opening date has been pushed back to August 23, TBD reports.

Fire Works Courthouse now has its own web presence and Facebook page, complete with photos of the nearly-completed interior.

“[The] build-out had gone well,” says general manager Jon Hoffmeyer. “[We] need to make some minor adjustments here and there, but that’s to be expected.”

The Arlington location is the company’s first attempt to expand beyond its original Leesburg restaurant. It should surpass the Leesburg location in scope — with more beer (30+ on tap, 100+ in bottles), more seating (276 inside, 112 outside, pending County approval) and an expanded menu. 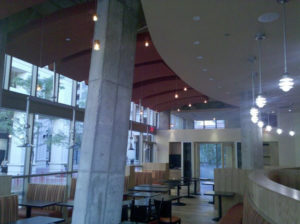 Not everyone is thrilled about the restaurant’s arrival, however.

“Have you seen the tacky, cheap red gate they put up around the location?” one anonymous design critic asked in an email.  “All it needs is some kindergartners running around within the fence… If they’re going to ruin a beautifully done courtyard and fountain area with their cheap tacky red fence, I won’t be eating there!”

The fence is required by law in order to serve alcoholic beverages outside on the patio.