Police and WMATA are investigating an apparent hit and run accident that happened in Ballston this afternoon.

The three occupants of the car that was hit and another witness told police that a Metrobus rear-ended a car at the intersection of Fairfax Drive and Glebe Road, then fled the scene by making an illegal right turn from the main travel lanes of Fairfax onto Glebe.

Jeffrey Nichols-Haining, the driver of the car, says the light had just turned green when he saw the bus barreling toward him.

“I did see it [coming] in my rear view mirror… I mumbled [expletive] then got hit,” he said.

“He waved us to go forward, then after we went forward he turned,” said Nichols-Haning’s sister, a passenger in the car. Nichols-Haining said another driver saw the accident happen and tried to help.

“Some guy… turned behind us, caught his bus number and called the cops,” he said. “We filled out a police report, and we have a witness report that was filed.”

A Metro supervisor showed up about an hour after the accident. A Metro spokesperson says the agency is investigating the incident.

Nichols-Haining says he was on his way back home to Morgantown, W.V. after picking up his sister, who had just completed an internship. Although the car appears drivable, he said he couldn’t get his camera to take photos of the damage because the trunk won’t open. He added that he hopes to get the accident behind him and get on with his travel plans.

“I’d like to keep going because I have a camping trip planned… hopefully we’ll be able to resolve this quickly and get on with it.”

Update at 4:25 p.m. — A WMATA spokesperson tells TBD.com that the driver of the Metrobus did not report the incident. The driver has been put on three days of leave and will undergo mandatory drug and alcohol testing, TBD reports.

Update at 8:55 p.m. — The bus was out of service at the time of the crash. The driver was cited by Arlington Police, WTOP reports. 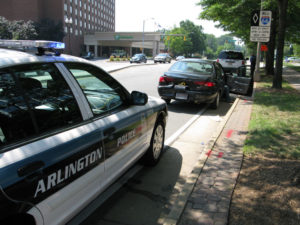 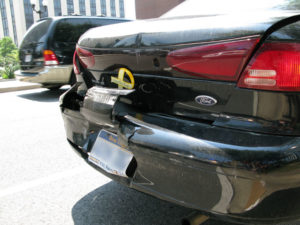 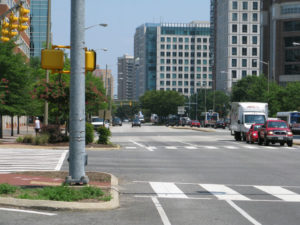 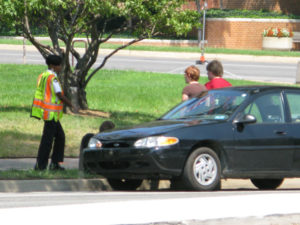