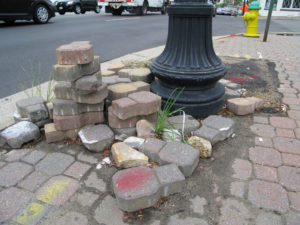 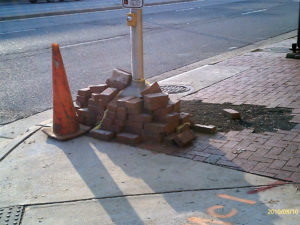 You might have noticed them around town: brick sidewalks torn up by utility work or some other sort of construction project. You’ll see a small pile of bricks (or “pavers”) by a street lamp and patches of asphalt where the bricks were removed.

We were recently asked whose repsonsibility it is to put the bricks back by a reader who was unhappy with the fact that the brick sidewalk in front of the Hyde Park Harris Teeter had been torn up more more than a month (it has since been fixed).

Here’s the response we got from county spokesperson Karen Acar:

Maintenance responsibilities for sidewalks throughout the County can be a complicated issue.

In residential areas it’s pretty simple. In nearly all instances the County owns and maintains the sidewalks – except for driveway aprons, which are the responsibility of the property owner.

Commercial areas are more complex. Many of the commercial roadways, including Glebe Road, Lee Hwy, Columbia Pike, Fairfax Drive, and most of Washington Blvd, are owned by VDOT. In most cases, VDOT would be responsible for maintaining the sidewalks, but not always.

In many areas along VDOT roadways that have been improved beyond standard concrete sidewalks (for example, pavers or more complex paving or streetscape patterns), VDOT has transferred maintenance responsibility to a third party – oftentimes the County – as a condition of approving the non-standard treatment.

Another factor (whether on VDOT or county roads) is the presence of county-issued site plans or other site development approvals. Many commercial developments throughout the County include conditions which require the associated developer or building owner to maintain the sidewalk adjacent to and in front of their site. Many of the sidewalks in commercial areas are not on public right-of-way, but are instead on private land which has been encumbered with an easement to allow public sidewalks and utilities as part of the site development.

In nearly all cases where sidewalk disruption is the result of some utility maintenance or other work, the party that conducted the maintenance or work would be held responsible for restoring the area. The County should be able to track who is responsible for the work by checking various permit systems (building, right-of-way, etc.).

Permanent repairs are often completed the same day as the work, but in other instances, repairs could require two weeks or longer – particularly if the sidewalk disruption is related to a large-scale repair or maintenance program.

Currently, fiber optics are being installed around Arlington County, including Columbia Pike, under a permit from Virginia Department of Transportation (VDOT). Once the contractor has completed installation, it is responsible for repairing the sidewalk.