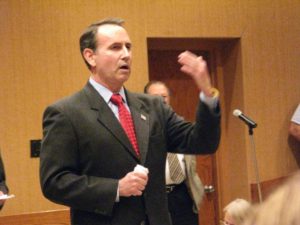 At a candidate forum sponsored by the Arlington Civic Federation, Republican Patrick Murray kicked off the post-Labor Day campaign season with an aggressive assault on the economic and spending record of ten-term incumbent Democratic congressman Jim Moran, previewing what will likely be a spirited two months of campaigning.

“Congress… is full of career politicians who are addicted to spending your taxpayer dollars and who will say and do anything to get re-elected,” Murray said in his opening remarks. “At the heart of that, ladies and gentleman, is my opponent, Mr. Moran.”

“For 20 years, he has spent taxpayer dollars… and what has it gotten us?” Murray asked. “We’ve got deficits as far as the eye can see. We’ve got unemployment that continues to go up. We’ve got $13 trillion of debt.”

Moran readily admitted that he has used his seniority on the House Appropriations Committee to steer money to the 8th District. But he said the money has made life better here — primarily by producing jobs.

“I earmark a lot of money through the appropriations process,” Moran said. “I do support federal spending, and I support the federal government… I’m doing everything I can to keep federal facilities here.”

Moran noted that Arlington has one of the lowest unemployment rates in the country and has recently been named a one of the most “livable” communities in the nation.

Later, Murray took a shot at a television appearance in which Moran said the economy had recovered.

“Jim just doesn’t get it. The other day on Hardball with Chris Matthews, he [said] ‘I don’t know why everyone is so upset… the economy is recovered,'” Murray said to cackling laughter among his supporters. “On what planet has it recovered?”

During a question and answer session with Civic Federation delegates, Moran was asked about a glossy, 16-page newsletter his congressional office mailed out over the summer at taxpayer expense. 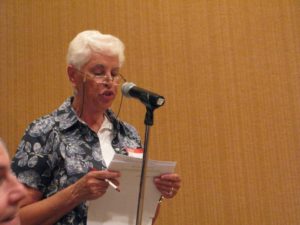 “It seems to me when you spend money on educating your constituents as best you can, it’s not an inappropriate way to spend money,” he said.

Murray pounced on the mailer issue, joking that when he received in the mail it he thought it was “a quarterly stock report from Goldman Sachs.”

Murray, a retired Army colonel and Iraq war veteran, was later asked about his lack of involvement in local civic activism.

“I’ve been a little busy serving my country all over the world,” he replied. “Listen, I’m not a politician, I’m running because I love this country.”

“I don’t believe the U.S. Congress is an entry-level position,” Moran quipped, to derisive laughter from Murray supporters. “I would have never run for Congress until I had proven myself on a local level.”

(This, one of several outbursts of laughter and loudly-whispered comments, prompted the moderator to step in and demand the audience be respectful of the candidates.) 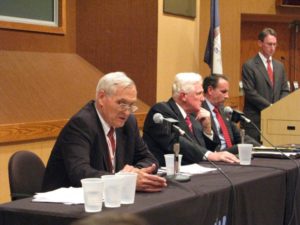 Murray seemed more poised, polished and comfortable compared to his prior debate performances. The one time he appeared uncomfortable during Tuesday night’s debate was while answering a question about the Supreme Court’s Roe v. Wade decision.

“I don’t spend a whole lot of time worrying about ‘pro this’ or ‘pro that,'” said Murray, who previously stated he’s pro-choice but then shied away from the position during the primary. “This is not a key critical issue.”

Ultimately, Murray said the abortion question should be decided on the state level.

Moran said he’s unabashedly pro-choice and said that abortions should be not only legal but affordable. Both Moran and Murray did say, however, that the number of abortions performed in the U.S. should be kept to a minimum.

Fisher blasted the war in Afghanistan as “illegal” and “foolish,” said he supports abortion rights, and called the current Congress a “pretend government.”