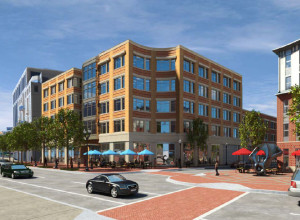 Say goodbye to Arlington Motorcar Service, Medical Service Corporation International and the Fashion Dreams tailor. The three small buildings on the 1700 block of Wilson Boulevard are expected to be torn down by the end of the year to make way for a new office building.

Last week Skanska USA applied for a demolition permit at the site. Barring any major obstacles, the buildings are expected to be gone by the end of the year.

In its place, Skanska, the American division of the Swedish construction conglomerate, is building a five-story office building that will include ground-level retail and 230 underground parking spaces. The project will also include the construction of a new road — an extension of Quinn Street that will break up the long block and connect Wilson Blvd with Clarendon Blvd.

The original developer, who sold the project to Skanska this summer, had originally hoped to attract a small grocer and a restaurant or two. It’s not clear if a grocer would be interested in the space, but Skanska will have to fill 28,000 square feet of retail space somehow.

Skanska says the building should be completed by mid-2012. The company is trying to obtain a minimum of a LEED Gold environmental certification.

Despite challenging economic conditions nationwide, Skanska says it’s moving ahead with the project based on the strength of the Arlington market.

“We firmly believe in the strength and long-term value in Arlington,” Skanska regional manager Rob Ward said in a statement. “This area is one of the best sub markets in the country, with low vacancy rates and high demand.”