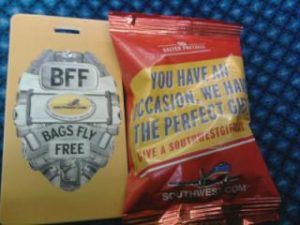 Southwest Airlines is doing some sort of protest/promotion outside the Rosslyn Metro Station this morning.

A tipster tells us that Southwest reps, armed with ID cards, free peanuts and a bullhorn, are promoting their “bags fly free” campaign.

Our tipster notes: “When asked if they would be flying into DCA, the response was ‘we’re trying.'”