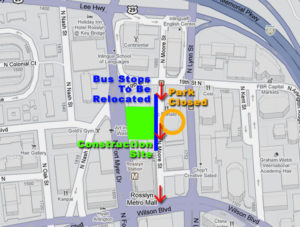 (Updated at 12:50 p.m.) Get ready for some changes in the way buses, cars and people move around Rosslyn.

Thanks to the construction of a new Metro entrance and the 1812 North Moore Street office tower, traffic patterns are changing and won’t go back to normal for another three years.

As a result, taxi stands and bus stops will be relocated to other parts of North Moore Street. Also, passenger pickup and drop-off will be prohibited on North Moore Street — it will only be allowed on the Fort Myer Drive side of the station.

To make way for the new Metro entrance between North Moore and North Lynn Streets, Annie’s Park, next to the McDonald’s, will be permanently closed later this month.