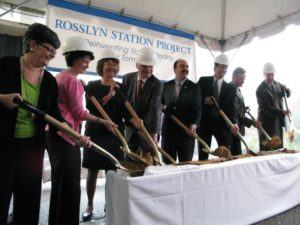 Fortuitously timed between yesterday morning’s downpours, local officials and Sen. Jim Webb gathered under a tent near North Lynn Street to break ground on a new entrance to the Rosslyn Metro station.

The entrance will be located across from the existing Metro entrance, between the planned CentralPlace office and residential towers and near the future 1812 North Moore Street tower. It will feature three high-speed elevators and an emergency staircase, but no escalators.

The $32.6 million project also includes the construction of new fare collection and vending equipment, as well as a new kiosk and a new entrance mezzanine.

“I think it’s a good investment,” said Webb, who pointed to heavy traffic on the nearby Roosevelt Bridge as evidence of the importance of the Metrorail system. 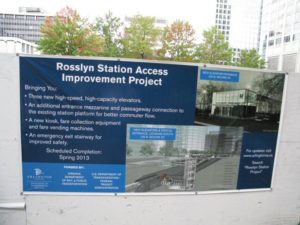 The entrance will be able to serve up to 2,000 riders per hour, officials say. Local leaders hope it will help keep pace with the station’s soaring ridership, which has increased 23 percent in the past decade and is expected to increase even more with all the new development in the area.

“The project that’s being initiated today will increase the capacity of the station,” said county board member Chris Zimmerman, who is also sits on Metro’s board of directors. “It will be easier for people to get in and out of Rosslyn station… It’s going to make Rosslyn a more vital place, and help us achieve the vision for Rosslyn that everyone here has been working on for quite a long time.”

The project is being funded by a combination of federal, state and county dollars.

Construction is expected to wrap up in the spring of 2013. In the meantime, construction has necessitated some traffic changes in the Rosslyn area.