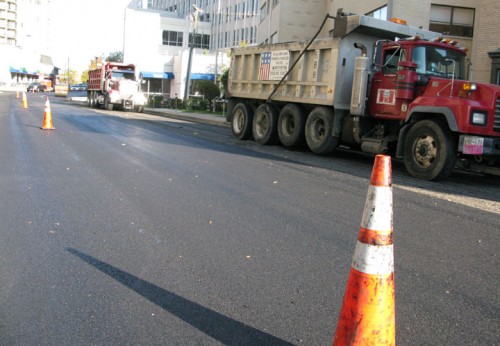 Wilson Boulevard Paving — Paving on Wilson Boulevard between Courthouse and Clarendon tied up traffic for the better part of yesterday afternoon. At one point, the lone open lane was blocked thanks to a construction foreman arguing a parking ticket with a parking enforcement officer.

TangySweet’s Clarendon Salad Shop Gets Name — “Rabbit” is the new name of the salad component of the future TangySweet store in Clarendon. As we first reported in May, store owner Aaron Gordon wants Rabbit to “improve on the salad offerings of competitors like SweetGreen, Mixt Greens and Chop’t.” Rabbit’s opening date depends on the construction of the Clarendon Center project, in which it will be housed. Look for a March or an April opening, says the Washington City Paper.

Beer Garden Suggested for Rosslyn Gateway Park — The addition of an eatery or a beer garden is among the ideas proposed for sprucing up Rosslyn’s Gateway Park. More from TBD.