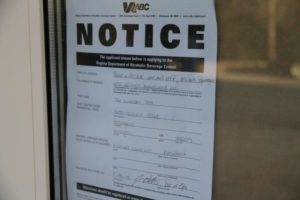 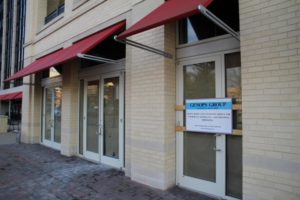 Update at 5:10 p.m. — We spotted a number of people coming and going from the brown-papered doors of 1650 Wilson Boulevard today. A quick peek inside an uncovered window revealed a mostly empty, under construction interior. So far, Landrum has not returned our calls.

Proving that this site has some of the smartest commenters out there, it turns out that the seafood restaurant planned for 1650 Wilson Boulevard — called ‘The Lobster Pot’ in a filing with Virginia’s liquor regulator — is actually owned by Michael Landrum of Ray’s Hell Burger fame.

For the past two years, Landrum has been relentlessly teasing area foodies with the promise of a new seafood restaurant.

First it was supposed to be called Ray’s the Net. Then that was changed to Ray’s the Catch.

Now it appears that Landrum’s seafood plans are back on track in the ground floor of a Rosslyn apartment building.

Will the new restaurant actually be called ‘The Lobster Pot,’ or was that a merely ruse to throw off the readers of lesser blogs? Stay tuned, we’re going to try to get in touch with Landrum to find out.