Just in case you’re not sick of towing stories yet, here’s one we happened to catch while checking out the new Michael Landrum seafood restaurant (update: lots of people coming and going from the brown-papered doors, but still no returned calls from Landrum).

Across the street from the new restaurant, an Advanced tow truck and a guy in a Mercedes were locked in a towing stalemate in the parking lot of the shopping center that houses Ray’s Hell Burger. In one corner, the tow truck and its crew of two had the Mercedes in its steely grips. In the other corner, the Mercedes driver was laying on the horn and refusing to get out of the car.

Ten minutes into the struggle, an Arlington police officer showed up and mediated. After some discussion, he allowed the tow truck to haul the Benz off to the Advanced impound lot.

The driver, who would only give his first name of Abe, was left fuming. 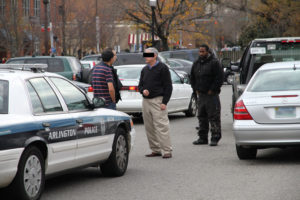 “Now I have to find a way to get to my bank to get cash, to get to the lot to have my car returned, then I would probably have to take a day off to go to court to sue them if I want justice,” Abe said. “They’re crooks because the car was not parked illegally and they’re getting away with it… we have no recourse, the police seem to be working against us, not with us.”

Abe explains that he was at the shopping center to drop off four boxes at a package center for a friend. He circled the crowded lot several times before deciding to park behind a couple of parked cars. He left a friend outside to make sure no one needed him to move his car.

Within two minutes, he said, the tow truck arrived. He somehow managed to get in his car while it was being hooked up, which prevented the towers from going anywhere, for safety reasons. The ten minute standoff then ensued, with the horn blaring, a small crowd watching and a number of people in parked cars blocked from leaving.

In a poll conducted yesterday, 55 percent of ARLnow.com readers said that the right of property owners to tow illegally-parked cars outweighs any need for more stringent predatory towing laws.