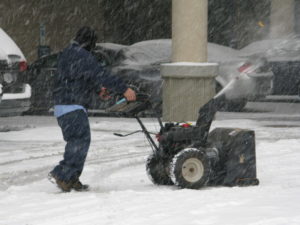 Now that Arlington County has on its books an official snow removal ordinance, which makes failure to clear the sidewalk in front of your property a civil offense punishable by fines, demand for the county’s snowblower loan program is apparently skyrocketing.

County Manager Barbara Donnellan told the board on Saturday that the county has received requests for 50-60 snowblowers so far this winter. Arlington only has about ten snowblowers available to loan to local civic associations.

Faced with that news, the board seemed willing to expand the snowblower loan program, the goal of which is to allow citizens to clear publicly-owned sidewalks in their neighborhoods. The program also allows civic associations to clear sidewalks for elderly or disabled neighbors who aren’t capable of doing so themselves.

“The goal has to be to get the sidewalk shoveled,” said board member Barbara Favola. “This, in my mind, is a tool to get us there.”

“The snowblower program… allows those area that are the county’s responsibility to get done earlier than if we waited for county employees to get done with their snow clearing responsibilities on the roads,” noted board member Mary Hynes. The board asked Donnellan to report back on the program, but did not take any concrete action.

While the board was unanimous in its praise of the program, at least one local civic association leader cautioned that the program could “grow out of control.”

“The county lacks storage space, and buying snowblowers or snow shovels for us is not your role,” said Chick Walter, president of the Arlington Ridge Civic Association. He said the program has been “glaringly unsuccessful” in terms of only benefiting a few county neighborhoods.

Walter urged the county to end the program and donate the existing snowblowers to local civic associations.

If you were sitting on the board, what would you do?