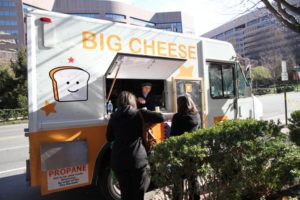 (Updated at 2:40 p.m.) The Big Cheese truck made its first publicly-announced appearance in Arlington today.

“Craft cheese with a ‘C'” is how owner Patrick Rathbone describes the difference between his grilled cheese and the pedestrian grilled cheese your mother used to make. (Sorry, mom.)

Ingredients include artisan Cowgirl Creamery cheeses, caramelized onions, grilled mushrooms and hardy bread. The end result is certainly the fanciest mobile grilled cheese this side of the west coast, where there are at least two other grilled cheese trucks in operation. You’ll want to take the sandwich out of the aluminum wrapping quickly, however, so the bread doesn’t get soggy.

The Big Cheese, operating out of what was once the Rebel Heroes truck, is licensed to operate in the District and apparently attracted a crowd near L’Enfant Plaza earlier this week. 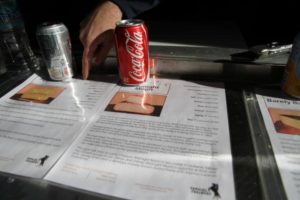 Owner Patrick Rathbone, a Rosslyn resident, said he was undeterred by the comparatively slow business on Crystal Drive and is still planning on splitting his time between the District and various Arlington locations. Also in his plan: serving french toast at the Courthouse farmers market.

Big Cheese will be making its first hire in the next week, which should allow the truck to serve customers more efficiently. (Each made-to-order grilled cheese takes two minutes per side to grill.)

A marathon runner and triathlete, Rathbone says pulling off the launch by himself required physical and mental stamina.

“There are definitely some marathon days,” he said. “I’m doing everything.”

Rathbone says his long-term goal is to open a brick and mortar restaurant, something the owners of the District Taco and Pupatella Pizza carts were successful in doing this year. He says the food truck allowed him to start a business for a tenth of the cost of opening a restaurant.

The truck could return to Arlington as soon as Friday. Follow Big Cheese on Twitter to find out where it’s going to be next. 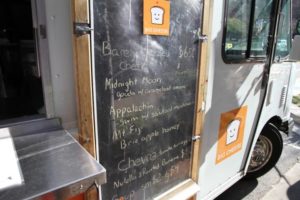 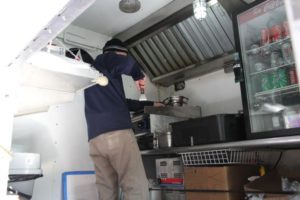