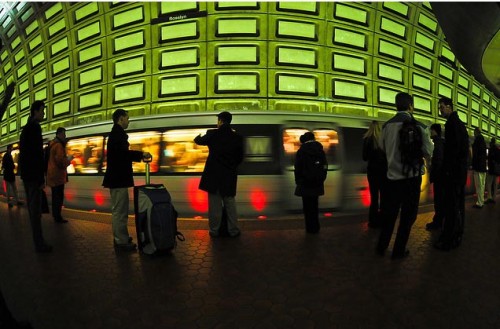 Hang On To Your Hat — A wind advisory is in effect until 9:00 tonight for the entire metro area. The National Weather Service says to expect sustained winds of 25 to 30 miles per hour, with gusts of 45 to 50 miles per hour. So far, the wind has not caused any major problems in Arlington. Dominion is reporting only 17 customers without power in Arlington as of 6:30 a.m.

Local Snowstorm a Bust, But Travelers Stranded — As it turns out, the snowstorm that was supposed to hit D.C. yesterday left barely a dusting. But at Reagan National Airport this morning, there is evidence of what could have been. The storm ended up blanketing northeastern cities with up to a foot and a half of snow, causing major disruptions to air, rail and bus travel. Many travelers who were trying to fly from Reagan National to Philly, New York or Boston instead spent the night at the airport. New York’s airports are not expected to reopen until this afternoon.

Arlington Residents Complain About Snow —  The Dec. 16 “storm” that dropped about two inches of snow on Arlington prompted a slew of complaints to the county’s new online snow issue reporting form. Check out quotes from four of the complaints, courtesy of TBD.

Rosslyn Commons Groundbreaking Set — The groundbreaking for 1510 and 1530 Clarendon Boulevard, also known as Rosslyn Commons, has been scheduled for the morning of Tuesday, Jan. 25. Developer JBG sent an email last week asking local leaders to “save the date.”