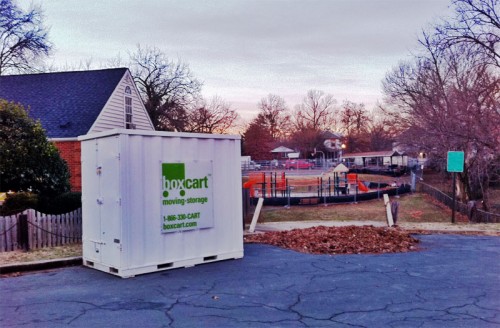 Earlier this week we reported that some residents were upset with loophole in Arlington’s parking code that allows commercial trucks to park for extended periods of time in front of schools, libraries and other county properties.

But trucks aren’t the only hulking masses taking up space on the side of local roads. Here’s what one peeved resident wrote us this morning:

Storage pods are very popular nowadays with all the moving that goes on in Arlington, but usually they are picked up in a few days and require a county permit. This pod has been on 1st Road South in front of Butler Holmes Park for over three months. We have called the Boxcart company, and were told they would pick it up. They didn’t, and why would they – they are getting free storage of the pod courtesy of Arlington. We have called the county twice. They said they would look into it because they should be charging a fee to Boxcart – much more interested in revenue generation than getting this storage unit off our street. They didn’t even do that, as the storage unit is still sitting there with no permit.