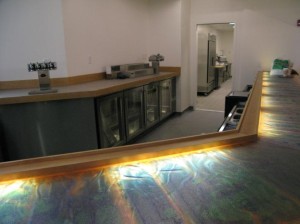 Expect the new restaurant inside Artisphere (1101 Wilson Blvd) to open in early March, according to a staff report attached to a sublease that the county board is expected to approve this weekend.

It was revealed last month that Barroso, Inc., which owns Guajillo on Wilson Boulevard in Rosslyn and Casa Oaxaca in Northwest D.C., was chosen to run the restaurant, bar and catering operations in Artisphere, which opened in October. The board’s approval of the sublease will make the arrangement official.

In addition to some of Guajillo’s signature Latin dishes, the restaurant will serve “sandwiches, salads, pizzas, small plates, desserts, and assorted other lunch and dinner offerings,” according to county staff.

Barroso will be leasing from the county a total of 1,129 square feet of space, which includes a bar area, a commercial kitchen and a walk-in beer refrigerator. Additionally, the lease “provides Barroso with a non-exclusive license to use the lower (8th) level and upper (9th) level ‘town square’ portions of the Artisphere for occasional table service, bussing, and cleaning activities related to its food and beverage service.”

The five year lease, which comes with renewal options for two consecutive five year periods, calls for the county to be paid the greater of either a minimum base rent or a percentage of the restaurant’s total sales.

The county and Barroso will agree on a name for the restaurant prior to its opening.