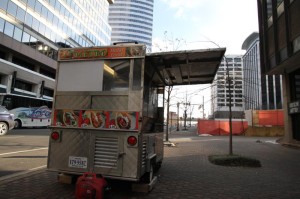 (Updated at 4:20 p.m.) For more than two years, the Metro Halal cart was a familiar sight at the corner of Wilson Boulevard and North Lynn Street, near the WJLA building in Rosslyn.

But now, after threats of being sued or arrested, Metro Halal owner Mohammad Khan has been forced to move the cart to a less trafficked, less familiar section of North Lynn Street. As a result, Khan says, his family and his business are suffering.

“It has affected my business very much,” said Khan, who also owns La’Jawab Kabob House on Lee Highway, where the cart’s food is prepared. “Today I lost money… In this bad economy, my business is destroyed by them.”

The “them” Khan is referring to is Monday Properties, which owns the 1100 Wilson Boulevard office tower. The company’s law firm has been sending cease and desist letters to Khan since May, ordering him to “stop trespassing” on the sidewalk. According to the letters, Monday Properties’ land ownership extends all the way to the curbs on Lynn and Wilson. 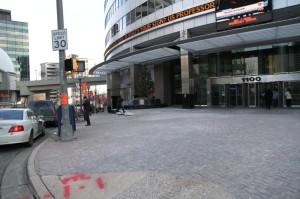 Although Khan reviewed the letters, he insists various county officials later told him that he wasn’t doing anything wrong. Thus, when he received another letter in November, saying in bold-faced type that “you must immediately and permanently cease trespassing on the property,” Khan kept on serving hearty $5.99 meals to local office workers.

That was until Thursday, when, according to Khan, a police officer said he would be arrested if he did not move to a new spot.

“I was almost crying, because I knew it would take me another six months or one year to get my customers back,” Khan said. “I did not have time to tell my customers.”

Khan said he used to be able to sell between $300 and $600 worth of food in a given day, thanks in part to the convenient and familiar location. In his new location, he says, sales are down to $250 per day.

“That does not cover my expense,” Khan said. “And what about my family, my kids, my mortgage, my car payments?”

Khan says he’d be willing to pay a couple hundred dollars in monthly rent — an offer Monday Properties has apparently rejected. He said he hopes that the company will eventually change its mind and let him return to his favored spot.

For its part, Monday Properties’ law firm also accused the Metro Halal cart of “impeding/restricting pedestrian traffic on the sidewalks,” creating a traffic hazard by serving food to passing taxi cabs, and of “not maintaining proper receptacles for the disposal of waste materials.”

On the last charge, Khan countered that he was vigilant about cleaning up trash, clearing snow, or otherwise maintaining the area around the cart.

A Monday Properties representative at the corporate office in New York declined to comment for this story. 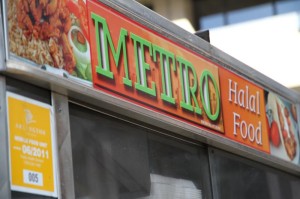 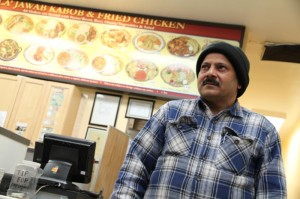