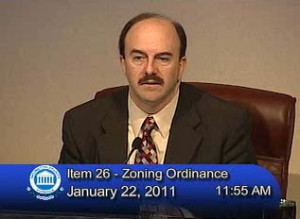 The county board voted unanimously on Saturday to beef up the county’s ability to go after companies that willfully violate Arlington’s stringent sign ordinance.

A new amendment to the Zoning Ordinance will make it illegal for “a firm, corporation, owner, agent or occupant” to cause or “knowingly” permit signs to be placed in the public right of way. Before the amendment, only individuals could be punished, and only if they were spotted physically placing the sign.

County Manager Barbara Donnellan recommended the amendment to help rein in rogue companies that place signs on weekends or in the middle of the night, when county zoning inspectors are not on the job.

The amendment will not change which signs are prohibited — certain signs, like temporary non-commercial and real estate-related directional signs and political signs during election season, will remain exempt — but it will instead enhance the county’s ability to enforce the ordinance, Donnellan said.

Initially, several board members objected to the possibility that under the amendment, community groups could be held criminally responsible for signs about pot luck dinners, blood drives and the like. They were assured, however, that county staff works with such groups to make sure their signs comply with the law. The biggest commercial violators, staff suggested, would be the primary target of the new enforcement powers.

During consideration of the amendment, County Board Chair Chris Zimmerman expressed frustration with the sign ordinance itself. 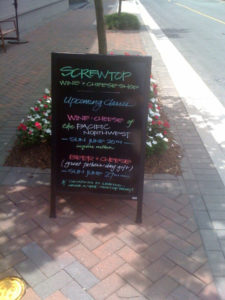 On the wish list of many business owners are “sandwich board,” which can be easily placed on a sidewalk in front of the business. Sandwich board signs were a particular source of controversy last year, after several were confiscated on struggling Fillmore Street in Clarendon. Although we had previously implied that such signs would be affected by the amendment that passed Saturday, county staff clarified that sandwich board signs are covered under a separate regulation.

Zimmerman, meanwhile, said he expects the process of rewriting the sign ordinance to be complete by the end of the year. He said he hopes the county can take a “common sense, reasonable approach” to regulating signs in the future.

One citizen who spoke before the board’s consideration of the amendment said that citizens should be empowered to remove illegal signs themselves. A board member, speaking for the rest of the body, said that was unlikely to happen, as both Donnellan and County Attorney Stephen MacIsaac have recommended against it.