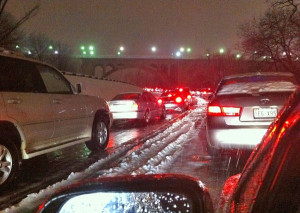 Closed since it was the scene of a “bumper-car graveyard” last night, one lane of the northbound George Washington Parkway has finally reopened near Spout Run.

The road was closed for most of the morning as crews worked to clear snow, fallen trees and abandoned vehicles.

G.W. Parkway drivers spent up to 14 hours in their cars, from yesterday afternoon to early this morning, as fallen trees and collisions blocked the roadway in both directions.

“I have a friend who has been there since 5pm. She says cops are walking up and down, people are huddling together in cars,” a Twitter user told us just before 11:00 last night. There were reports of cars running out of gas and of people simply getting out of their cars and walking.

One woman who had been stuck on the Parkway told NBC Washington that she made it home at 5:30 this morning, after leaving her Crystal City office at 4:45 p.m.

Abandoned cars are being towed to the parking lots at the scenic overlook and Roosevelt Island.

Dr. Gridlock has more information on how to retrieve an abandoned vehicle.