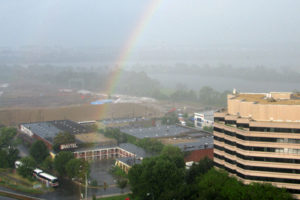 Boeing will be building a 419,000 square foot office project at the very north end of Crystal City, near the future Long Bridge Park, according to commercial real estate information firm CoStar Group.

According to a site plan submitted to the county, the project will consist of three buildings, each between four and six stories high, built on a 4.7 acre parcel of land along Old Jefferson Davis Highway. The office project is expected to replace a number of dilapidated structures, including the Clark Street Playhouse and the abandoned Crystal City Motel.

(The site is shown to the left, during a rain storm last year.)

Building heights are being kept relatively low, likely due to the fact that the site is along the landing path to Reagan National Airport. Boeing will consolidate its existing Rosslyn and Crystal City offices in the new complex, once it’s complete.

The project is being undertaken by Monument Realty, which has struggled in the wake of the global recession. CoStar reports that construction is expected to begin by the end of this year.