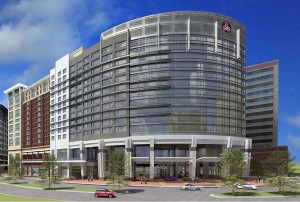 The opening of two large hotels in Crystal City is drawing near.

The hotels will both be owned by developer JBG and managed by Marriott. Construction, which began in 2008, was funded with $129 million in financing from Wells Fargo.

The hotels are located on the southern end of Crystal City. They have a total of 625 rooms between them, and are expected to create about 500 jobs.